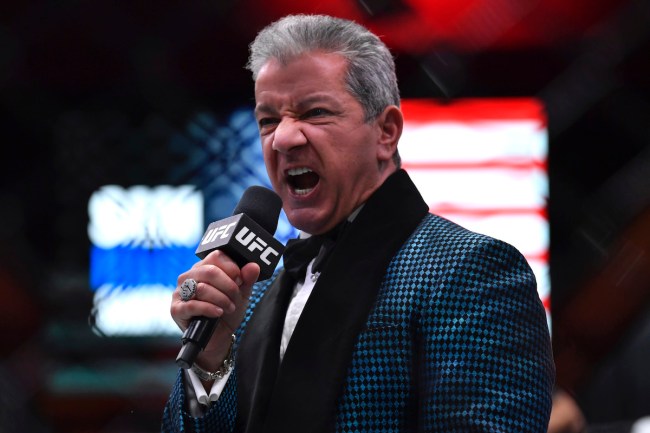 Bruce Buffer is the legendary UFC ring announcer who uses his flair to bring all sorts of energy into the Octagon before a big fight. But the 63-year-old had a little bit of a different task recently when some (very ballsy) dude actually hired him on the video-sharing app Cameo to deliver some news to his girlfriend — and, yep, it was the type of news no girl wants to hear.

According to Buffer’s social media, some guy paid $299 for 14 seconds worth of content, with the UFC announcer using his skills to break up with some poor girl named Kaylee. Take a look below at the viral video.

Imagine that this is how you learned that you were being dumped 😭 pic.twitter.com/nKdHxPzAVp

I’ve got so many questions right now. First off, what in the hell did Kaylee do to deserve this? I mean, I’ve had some crappy ex-girlfriends in the past — one of which up and moved out one day without any warning (no joke) — but this is some next level crazy type of stuff. Did she cheat? Is she just a terrible person? Maybe she sucks in the sack? I don’t know, but I’d really love to hear the story.

Second, this dude, man… he’s got some big cojones. It’s one thing to up and ghost a girl and give her the clear hint that things are over. It’s another thing to break up with her via text. But it’s straight up savage to spend about $300 to hire Bruce Buffer to do your dirty work to call things off with a girl that you clearly don’t enjoy too much. This might just become the newest way for millennials to breakup.

Who knows, though, maybe I’ve got this all wrong and Kaylee’s actually happy with this whole thing? Like, being dumped sucks anyway, but it’s kind of a sign of endearment knowing some guy spent $299 to get Bruce Buffer to do it for him, right? She can go off into the single pool again with a little confidence knowing her ex didn’t just text her “see ya, yo” and then block her number.

The joy in his eyes for that delivery. What a total bastard. Love him.

I could listen to this shit all day.

…there are worse ways to be dumped. Sure, being dumped sucks. But being dumped by Bruce? I’d cry tears of (temporary) joy

Call me traditional, but I’d prefer breaking up with someone face-to-face and risk the possibility of getting slapped or yelled at to further validate my decision. But hats off to the guy who thought Bruce Buffer delivering the break up news was the way to go, because it’s a helluva lot easier — and less messy — than having to do it yourself in person.