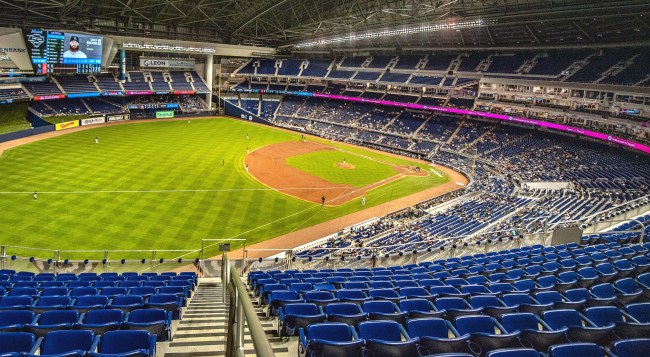 Of all the Major League Baseball teams hurt by the pandemic completely shutting down live attendance at baseball games during the 2020 season, the Miami Marlins were probably one of the franchises least affected.

After once again being the worst team in the league when it comes to average home attendance in 2019 (10,016 fans per game), even the governor of Florida, Ron DeSantis, clowned the franchise.

“You go down to the Miami Marlins, as much as I hate to say it, they’re not selling out,” DeSantis said last March. “You go there and it’s kind of social distancing anyways, because the stadium’s usually only a quarter full.”

Which is why baseball fans had themselves a good laugh when Miami Marlins boss Derek Jeter announced this week that, due to the continuing pandemic, Marlins Park will be opening up at around 25 percent capacity (or appriximately 9,300 fans) to start the 2021 MLB season.

“We look forward to having the opportunity to have fans come back to our ballpark,” Jeter said on Monday. “There will be a limited number of fans that are allowed at the onset. We hope those numbers increase throughout course of the season, but the most important thing for us is to make sure everyone is healthy and safe.”

Jeter added, “One thing that was a little bit disappointing last year — going through the pandemic, you hear about the excitement of our fan base, but they weren’t able to come to games. I would have loved to have seen what that looked like.”

Needless to say, the internet had jokes.

They do this every year, just announcing it formally in 2021. https://t.co/hyqdZdv8x8

According to their official (probably inflated) attendance numbers, the 2019 Marlins failed to reach 20% capacity at roughly a third of their home games. https://t.co/8mSfF7yQPB

Marlins going back to their full attendance for the 2021 season 👀 https://t.co/tKXaRsUmes

Was it ever at 20% capacity? https://t.co/EhxTJaEBVc

How are they going to get that many people to buy tickets?

Perhaps the Marlins going 31-29 and actually winning a postseason series in 2020, the first time since 2006 that the Marlins have reached .500 in any season, after posting .391 and .352 winning percentages – both under Jeter management – in 2018 and 2019 respectively, fans will actually come out and watch the team play this season. Heck, the Marlins could even (technically) have their first sellout since who knows when if they can continue to play well.