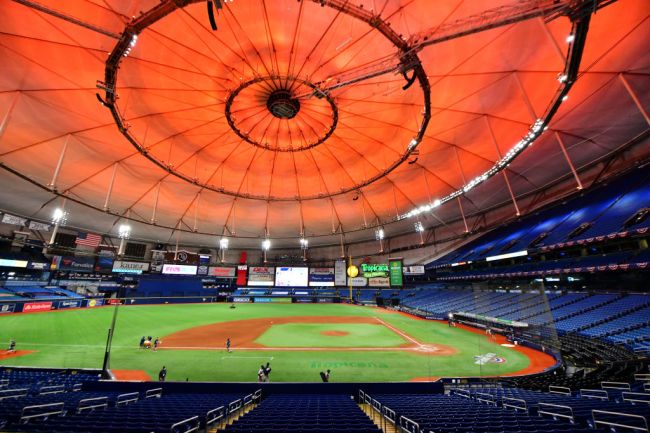 Despite being atop the standings in the American League, nobody wants to watch the Tampa Bay Rays play baseball. The team set an all-time low attendance record on Monday night and it is extremely embarrassing.

Sitting 1.5 games ahead of the Astros in the AL and only five games back from the Giants in the overall MLB standings, the Rays hosted the Orioles for the first of a three-game stand. Baltimore is on the opposite end of the spectrum and sits last in the AL and second-to-last in the MLB.

Terrible turnout at the Trop.

The 9-2 result in favor of the home team was a positive result but there was hardly anyone in the stands to witness the beatdown.

Just wanted to make sure it wasn’t a late-arriving “crowd” to see 1st-place #Rays in 1st home game since Aug. 4. This is the 4th inning scene. pic.twitter.com/0VUpzAKMsu

Tampa Bay announced a total attendance of 5,460 for the night. The abysmal number was the lowest since the then-Devil Rays played their first game at Tropicana Field on March 31, 1988 against the Tigers. ‘The Trop’ hosted an opening day crowd of 45,369 on that day— more than eight times the attendance of Monday.

Putting the number into context.

Here’s the thing— there have been way worse attendance at a game throughout history and even in recent years.

I don’t run the Pirates. If I did, this look a couple minutes before first pitch would scare the hell out of me: pic.twitter.com/eA85K7RHaP

In each instance, there was one common theme— the team with poor attendance was very, very bad. For Tampa, however, that is not the case.

The Rays are less than a year removed from a World Series appearance. They are atop the AL and not far off from leading the entire MLB.

It is not a secret that The Trop is a dump, inconvenient to get to and simply not an enticing experience. With that being said, the Rays were outdrawn by the 51-68 Marlins, who had 6,442 in attendance for a 12-2 loss.

Concerning would be an understatement if you’re a part of Tampa’s front office.