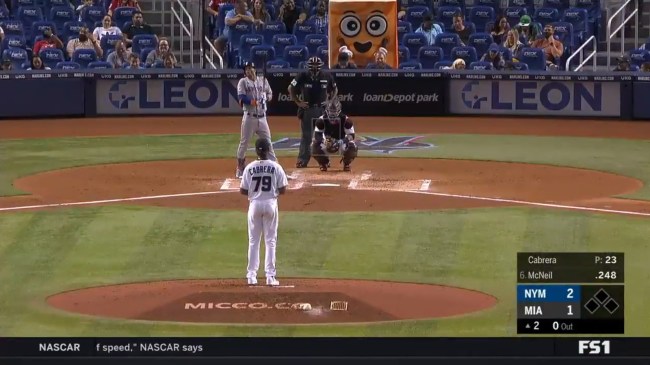 If you didn’t happen to catch Tuesday night’s Miami Marlins and New York Mets game, consider yourself lucky. No, not because the Mets are disappointingly average or because the Marlins are their usual sorry selves, but because you would have had nightmares after seeing what was going on behind home plate during the game. (Although those other two reasons are also solid grounds for not watching as well.)

The real reason why you should be glad you missed the telecast of the Marlins and Mets game is because, for some reason, there was a GIANT CINNAMON TOAST CRUNCH MASCOT sitting directly behind home plate freaking everyone right TF out.

There’s a piece of Cinnamon Toast Crunch calling balls and strikes behind home plate during the Mets-Marlins game tonight pic.twitter.com/GM8sezJlWI

What… the hell? Why? I mean, sure, it’s for some kind of promotion, I guess, but… damn, that’s… unsettling.

Setting aside the fact that a GIANT CINNAMON TOAST CRUNCH MASCOT is taking up three prime seats right behind home plate and obscuring the view for other fans who paid top dollar for their cherry spots in the stands, it was distracting literally every person who was watching the game on TV at home.

Imagine sitting behind it pic.twitter.com/Nl8FjFF7fs

Spend a few hundo on tickets behind home plate and you're sitting behind the Cinnamon Toast Crunch man pic.twitter.com/UBwm6245gN

To be fair, doesn't look like moving over is much of a problem

Of course, nothing like a GIANT CINNAMON TOAST CRUNCH MASCOT sitting directly behind home plate at a Mets-Marlins game can make its way on to the internet without immediately being turned into a meme.

Paying for three seats so you can wear your favorite Cinnamon Toast Crunch suit to watch your team play baseball >> pic.twitter.com/mqCt2Lm2wz

Other possible explanations for why there was a GIANT CINNAMON TOAST CRUNCH MASCOT sitting directly behind home plate like the Marlins are some kind of Minor League Baseball team were also offered up by the internet.

There is someone in a humongous Cinnamon Toast Crunch costume directly behind home plate and I’m wondering if it’s actually a demon that has been haunting the Mets all season and only now revealed itself to the rest of us.

Mostly, though, it was just really freaking disturbing, and distracting, to see.

Imagine trying to pitch and you’ve got a giant Cinnamon Toast Crunch man starring you down pic.twitter.com/keus8yfeNC