Javy Baez & Co. Tuck Tail, Apologize To Their Employers For “Booing” Them 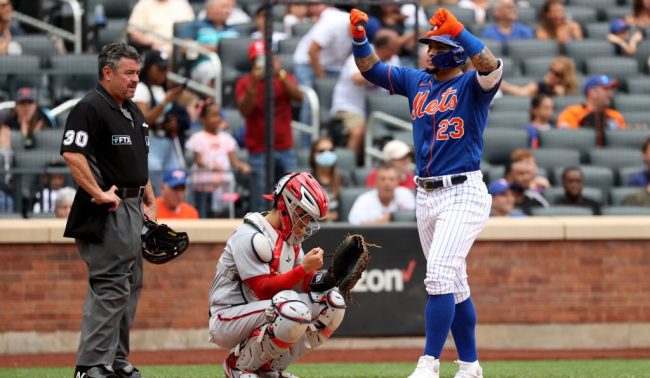 I’m a Mets fan. It sucks. I’m not even going to pretend it’s a remotely enjoyable experience, or that there’s beauty in the struggle — because it’s not. If I could wake up tomorrow as a New York Yankees fan, I would, just as long as my Dad jumped ships with me, because that, after all, is what sports are all about: bonding with your family.

And yet, despite this, I love the New York Mets. The same way I do the New York Jets and Liverpool Football Club. Through the good and the bad, the ups and the downs, the highs and the lows. When done correctly, rooting for a sports team ties you to both your family and your community. The Mets may drive their fans insane but they also link the people of the Tri-State area, and New York City, in ways few things do.

This is all to say that the antics of Javy Baez, Francisco Lindor, and Kevin Pillar on Sunday — in case you missed it, the trio were giving each other the “thumbs down”, which Baez said was there was to “boo” the fans — had me heated.

Francisco Lindor, Javier Báez and Kevin Pillar were among those Mets players to flash thumbs-down signs after their hits today.

I’ve been rooting for bad New York City sports teams for close to a quarter-century now and I’m not sure I’ve ever seen a player —- let alone one who just arrived and has just 13 hits for the team whose fanbase he’s trashing -— take shots at the very fanbase he’s paid to perform for. Fans — particularly those who go to the ballpark and buy overpriced beers and authentic jerseys — are what keep baseball afloat, especially now more than ever as the game’s influence continues to dwindle in the modern landscape. For Baez to take a shot at those people for being fairly critical of the team’s woeful August performance is not only foolish but it’s ignorant.

It should come as no surprise, whether due to the public reaction or discipline from the Mets organization, that Baez and co. have already tucked tail and walked back their statements. How did that one work out for ya, fellas? About as well as your August performance, I reckon.

Javier Báez on his comments from Sunday afternoon: "I didn't mean to offend anybody. And if I offended anybody, we apologize."

(You can hear some boos from fans in the background at the beginning.) pic.twitter.com/QK1K6hujv1

The Mets held a team meeting earlier this morning to address the boo situation. Luis Rojas won't get into who spoke or what the overall message was.

#Fans We just need to stay together! We want to win too! El Mago gonna be El Mago! #LGM