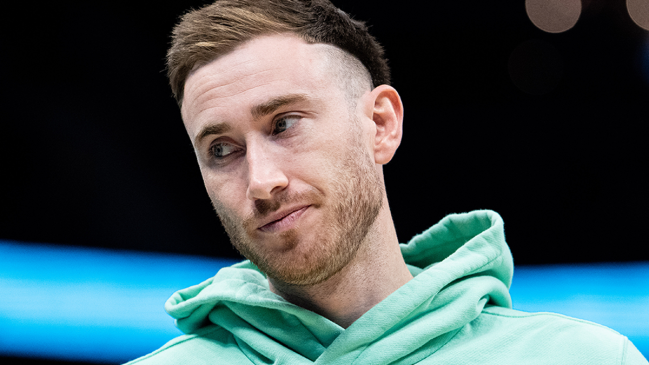 In 2010, Gordon Hayward arguably reached what was simultaneously the peak and nadir of his basketball career when he led Butler to the national championship game and came this close to flipping to script on Duke and pulling a Christian Laettner with what would’ve been a buzzer-beater to snatch the title from the Blue Devils.

A few months later, he was selected by the Jazz with the ninth overall pick in the NBA Draft to kick off what has been a perfectly respectable career in the league. While he’s shown flashes of brilliance and earned an All-Star Game selection in 2017, he’s unfortunately been plagued by injuries—especially the ankle issues that have continually reared their ugly head.

While I didn’t intend to do this, I just realized “ugly head” serves as the perfect segue into discussing the, um, interesting decision Hayward made during a visit to the barber at some point during the offseason.

Gordon Hayward, with the new haircut, said he “feels great” heading into the season. Said he is hoping to stay healthy. pic.twitter.com/zFRwesCkqz

While it’s been a few weeks since Hayward showed off his new look, it took NBA fans a while to notice—but they have not been kind after a picture from a recent press conference started to make the rounds.

Hayward has traditionally opted for the fairly popular hairstyle I personally refer to as “The Aspiring DJ From Bushwick,” and while it’s unclear what inspired his decision to adopt a new look, one thing is for certain: NBA fans aren’t exactly on board with the pivot.

That includes many people who suggested he sat down in the chair and told his barber “Give me The Bully From A Christmas Story” or “Let’s try The Kid From Harmony Korine’s Gummo.”

Others simply expressed various versions of “Oh no Gordon, what are you doing?”

Gunna locked up but the barber who did this to Gordon Hayward is roaming free? Crazy smh pic.twitter.com/gOuz5Al6Z9

Prayers out to Gordon Hayward 🙏
he isn’t hurt but he does go to Supercuts pic.twitter.com/MFB9wSoiNp

Gordon Hayward has to fight his barber. https://t.co/8ZEJhfMEnc

I’m still not sure what Hayward was thinking when he decided to do that, but I am sure that it is not it.