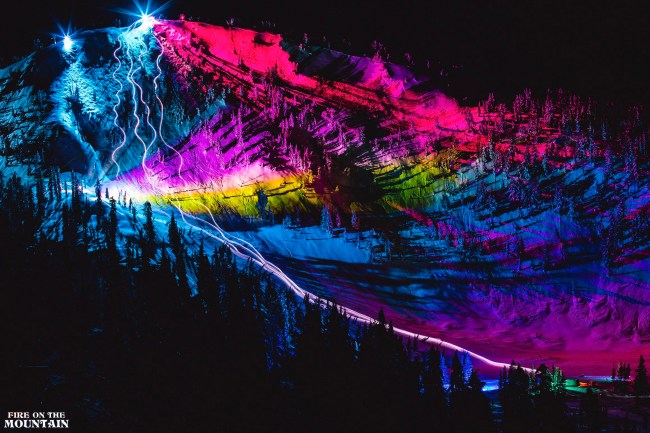 I remember the first time I saw a Grateful Dead Stealie on a pair of skis. Roughly 1994-1996, in a lift line at Seven Springs Resort, in the Allegheny Mountains around Pittsburgh. Slapped tastefully on a pair of straight, vintage white K2s right before they started pushing hour-glass shaped skis with better shredding potential.

I was still in elementary school, but just coming the age when I was just starting to synthesize what a Stealie meant from (A. the actual music of the Grateful Dead, sure. But also (B. the kinship and unity many people felt when talking about the Grateful Dead.  The older I got, the more into The Dead I got. And with that, the more I neurologically linked the good old Grateful Dead with all that the band seemed to represent with all my favorite outdoor pursuits – Skiing, hiking, fly fishing – hell, chillin’ by a lake with like-minded folks and Dick’s Picks Volume 7 spinning from a Panasonic boombox somewhere in the background.

Since the band’s inception in Palo Alto as The Warlocks, there’s always been a thru-link between the Grateful Dead and crunchy outdoor culture. Just take an internet stroll through From The Lot to enjoy a virtual museum of unofficial lot shirts that incorporate the band’s visual iconography (skeletons, dancing bears, Stealies, roses, lightning bolts) into brightly colored shirts with a Jerry bear or skeleton skiing or surfing.

Anyway, you get the point. Deadheads like adventure. Deadheads like pushing boundaries. Deadheads, mostly, like to get outside and explore. Perhaps there’s a distinct adrenaline correlation between shredding the gnarliest of the gnar and soaking in Jerry and the gang shredding a second set Shakedown opener.

As a huge who can’t listen to “Ripple” without getting misty-eyed (…or straight up bawling my face off), I love this project with iconic action sports production studio Teton Gravity Research. It’s the brainchild of action sports director Chris Benchetler, a California native who “grew up skiing Mammoth Mountain” and created a really badass skiing series with GoPro called Chasing El Nino that was released in 2016.

His latest project is badass undertaking for anyone who’s spent a little time on the mountain, spent a little time on the hill: A short action sports film called Fire On The Mountain that interweaves brilliant action sports B-roll with an officially-licensed, fully authorized soundtrack of jams from the Grateful Dead’s vault. Bill Walton narrates the project, waxing in the most endearing Bill Walton ways about the cosmic rhythms that bind us from just listening to the music play.

The cinematography is spectacular, as is it’s pairing with music picked by Grateful Dead archivist David Lemieux. Here’s the track list, which you can stream as a playlist right here.

If you know your Dead (…and, if you even bothered to click this here on BroBible, you probably know your Dead…), it’s some of the crowned jewels of the official archival catalog.

Besides the audio-visual experience, Fire On The Mountain features a who’s who of the action sports world doing what they’re great at: Getting outside and getting after it. Snowboarders include Jeremy Jones, Danny Davis, Kimmy Fasani. Surfer Rob Machado rigs up his board with an LED Grateful Dead bolty for a night surf. And skiiers Michelle Parker and Chris Benchetler tackle all kinds terrain.

It’s one of the most enjoyable action sports projects I’ve watched in a very long time and it’s only a half hour.

For anyone who loves the intersection of America’s greatest rock ‘n roll band and outdoor action sports culture – aka all you many many many mountain/surf town heads out there that still fill Folsom Field every 4th of July weekend – I highly recommend throwing it on your TV in 4K in full.

What a not so long, not so strange trip it is.