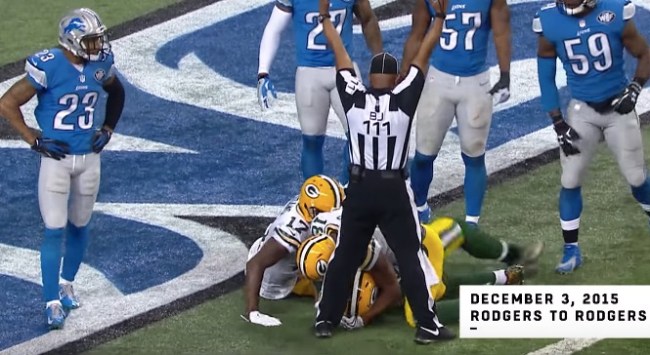 The Miami Miracle was absolutely insane. I was a hater at first and thought that everyone was blowing the play out of proportion. I’ve since come to my senses and realized just how insane that play was.

I’m not a Pats or Fins fan or hater. I’m a Bucs fan so I didn’t have a horse in that race. When I first saw the play my thought was ‘well, yeah, that’s exactly what the hook-and-ladder play is designed to do.’ Now that I’ve had a chance to watch The Miami Miracle play several times I’m convinced that was, in fact, the greatest play in Miami Dolphins franchise history.

The mere fact that it happened against the Fins’ biggest rival, the New England Patriots, would’ve catapulted it into the top-5 plays for the Dolphins even if it wasn’t an outrageous hook-and-ladder play. This was a hugely emotional win for the Dolphins and one that the rest of the NFL was thankful for as it took the Pats down a peg.

As a tribute to The Miami Miracle, the NFL’s video team spliced together this clip of EVERY NFL TEAM’s greatest game-winning touchdown. They went into the vaults and pulled video on each team’s last-second drive as time expired and I’m legitimately shocked that they haven’t released footage like this before because it’s so damn good.

So many memorable plays in there. So many of them have ‘Miracle’ in the name. The Miami Miracle. The Miracle in the Meadowlands II. The Minneapolis Miracle. At some point, we really need to drop the word ‘miracle’ from sports and realize that if this shit has happened for EVERY TEAM IN THE NFL it’s not exactly a miracle.

If you’re looking for more footage, this clip of the greatest TRICK PLAYS in football history is also pretty darn good.