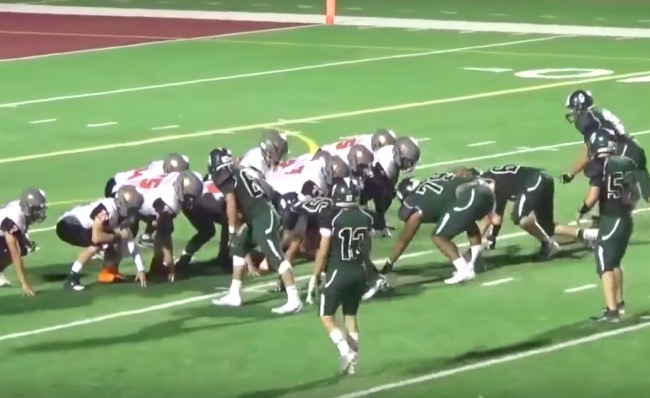 This play is absolute insanity, and I’m not being hyperbolic at all. The only real explanation for what you’re about to witness is that Cameron Baker from Jefferson, Indiana has superpowers. The entire opposing defense is attempting to take him down. Unfortunately for the opposing defense, not a single one of them appears to practice form tackling.

Marvel as Cameron Baker runs directly into the heart of the beast and emerges victorious to run out an 80-yard touchdown. If this doesn’t make the SportsCenter ‘Top 10 Plays of the Week’ it will be a goddamn travesty:

Seriously, he had to have covered his pads in butter or sunscreen before that play. He caused so many players on the opposing team’s defense to make horrific tackles, or to just miss entirely. It was like he created some sort of tornado vortex with his running that caused everyone to forget what the fuck they were doing on the field in the first place. Here it is once more in GIF in case you want to watch it on repeat like I’ve been doing:

The fact that this is H.S. football changes nothing for me, this is still one of the most impressive TD’s I’ve ever seen at any level. (h/t MaxPreps YouTube | MamaBakes75 Twitter)