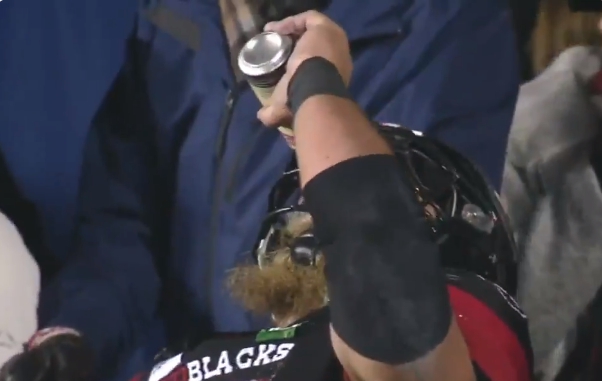 During the game between the Ottawa Redblacks and the Toronto Argonauts at TD Place Stadium something magical happened. In the third quarter, Redblacks’ running back Mossis Madu punched through the line for a one-yard touchdown. Nobody was more excited than Ottawa offensive lineman Jon Gott, who decided to celebrate for Madu. Gott ran to the stands and grabbed a beer from a fan. The lineman from Boise State promptly pounded the beer and then crushed the can on his helmet.

They celebrate TDs a little differently in the Canadian Football League. pic.twitter.com/oDCrGbHWyH

Not a great touchdown celebration, THE greatest touchdown celebration. Chugging a beer with a helmet and faceguard is not as easy as Jon makes it look. Keep in mind that it was 39 degrees in Ottawa on Friday night, so dousing himself in beer wasn’t exactly refreshing, but a magnificent revelry.

Time for a cold one.

The iron-fisted overlords of the NFL would have suspended Gott for seven games for cracking open a cold one then chugging beer and having fun during a game in a genuinely awesome moment that entertained the masses.

That touchdown and extra point gave the Redblacks a commanding 24-9 advantage and would win by the same score. Best believe this bearded beast’s beer bash beats everything.