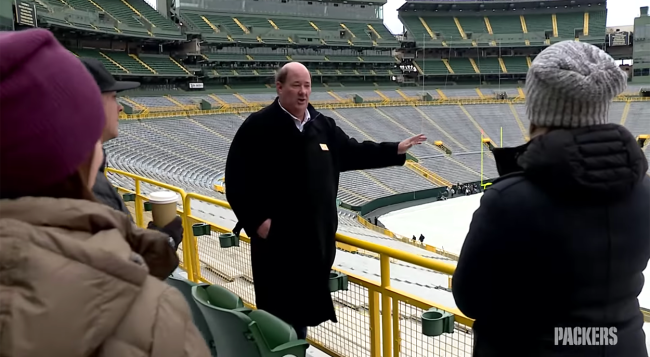 The Green Bay Packers are on a bye week this week and decided to give their employees some time off. In their absence, the second-place team in the NFC enlisted some help from someone who knows his way around an office.

On the first-ever episode of ‘The Bye Week,’ Brian Baumgartner stepped in to perform the work that still needs to be done.

Baumgartner, who is best known from his role as Kevin Malone on ‘The Office,’ is a big Packers fan. He is also “very very good” friends with quarterback Aaron Rodgers.

In his role with the organization, Baumgartner even got his own workspace— a reference to the show. During Season 1, Episode 3, Dwight Schrute is tasked with picking a healthcare plan.

Schrute requests an office, and Michael Scott gives him the conference room as a temporary workspace. That was exactly what Baumgartner got with Green Bay.

After settling into his new role, Baumgartner offers a hilarious portrayal of an employee for the franchise. He was tasked with giving tours, taking phone calls, breaking down some game film, and organizing the mail room.

It’s hilarious. Throughout ‘The Bye Week,’ Baumgartner explains (very incorrectly) how they remove the snow from the field, makes a “That’s What She Said” joke, and even pointed out the spot in Lambeau Field where Aaron Rodgers was born— supposedly.

Although he may not have been the best employee, his short tenure with the Packers is extremely entertaining. Unfortunately, however, the team had to let him go for his performance.

Sit back, relax, and enjoy ‘The Bye Week’: