If You Want An Authentic Green Jacket From Augusta National, This One Is Up For Auction Right Now 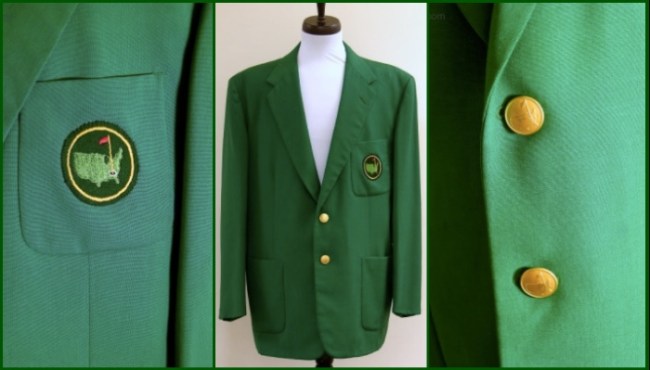 The Masters is next week and people who are psychotic about golf (points double thumbs to chest), are doing whatever they can to start talking about it. This year’s tournament is already full of storylines — Will Tiger play? Will Phil finally snap his years-long winless streak?  Is Dustin Johnson going to blow the field away? Will Jordan Spieth erase the memory of his 2016 collapse by winning for the second time in three years? — but now this green jacket, which seems to be authentic and was bought for $5 at a thrift store, is up for auction at Green Jacket Auctions and the price is getting really high.

Obviously there is a ton of a speculation and doubt around the authenticity of a Green Jacket, because who the fuck would sell their Green Jacket? But Green Jacket Auctions is a legitimate auction house and they have every reason to believe this jacket is real.

Sitting in a stack of previously-worn blazers at a Toronto thrift store was the unthinkable – an original Masters Tournament Green Jacket with a price tag of $5. The familiar green color of the jacket, and its iconic breast patch, went unnoticed by consignment shop workers and customers. That is, until an avid golfer saw this piece of clothing and knew exactly what it was – not just a green jacket, but The Green Jacket.

When the so-called “Thrift Store Green Jacket” was first discovered in 1994, the speculation was rampant. Was it real, and if so, where did it come from? The jacket itself revealed few clues. The internal tagging definitively dates the jacket to the early 1950s – one of the earliest green jackets in existence. But the original owner’s name was tantalizingly cut out of the jacket. Augusta National Golf Club may have unintentionally fanned the flames of speculation, as they confirmed the jacket’s authenticity but then refused to answer any questions as to the identity of its original owner. Could it be the long lost green jacket of a Masters Tournament Champion? Did a member mistakenly, or intentionally, remove the green jacket from the club’s grounds many years ago?

This authentic green jacket dates to the early 1950s (possibly as late as the mid 1950s). Its internal tagging from Cullum’s department store in Augusta unquestionably predates the Cullum’s tags inside 1957 Champion Doug Ford’s Green Jacket.

The offered Thrift Store Green Jacket is among the finest green jackets in existence. Perhaps Augusta National knows something about this jacket that they aren’t telling us. Until they do, the mystery of its original owner will continue to be the subject of curiosity and speculation.

The starting bid for this jacket was $5,000 and at time of publish the price has gone up to $10,717. What I am really trying to say here is: who the fuck is going to loan me (See: give me with no expectations of repayment) $20,000 to buy this? Anyone? Bueller? Bueller?