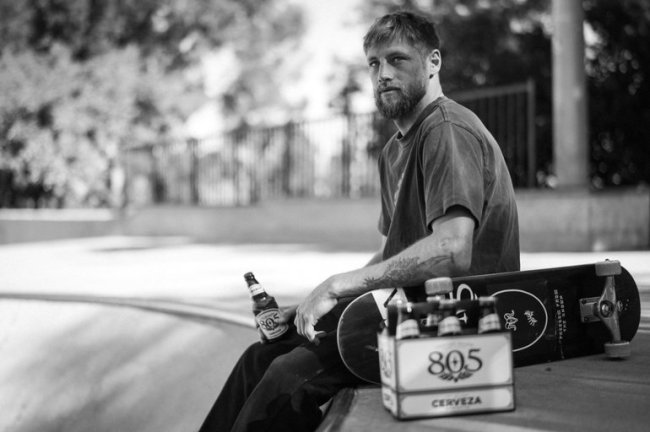 Greyson Fletcher grew up sleeping to death metal. His room was above the garage and his father, Christian, would play with his band right below his son. As a result, chaos is something that Greyson has been familiar with since a young age and he likes it that way.

Carving his own line.

The 30-year-old heir to surfing family royalty was always the black sheep. His great grandpa, grandma, grandpa, dad, aunt and uncle are all big in surf culture. Christian was one of the first to do aerials in surfing and his grandparents own Astrodeck, the first company to produce grip tape for surf boards.

He chose the asphalt over the ocean. The two sides used to butt head growing up — particularly the skaters toward the surfers — but these days, in recent years, the two sides have come to a sort of reconciliation.

Despite the rigidity between surf and skate, Fletcher has always found the overlap been the two. He took the platform and experience that his lineage gave him and made it his own.

“Growing up, my dad and my uncle always told me to go fast and go big,” he said. “My style is kinda like riding a big wave, but on a skateboard. You’ve got the concrete instead of water, but you still have that big face, that big wall for plenty of speed and air.”

“I don’t think anyone influences you to do anything,” said Fletcher. “You’re your own person always. Do what you want to do, be how you want to be.”

Even so, John Cardiel and Tony Trujillo were two skaters he liked when he was younger. And while Fletcher hasn’t watched skate videos since the VHS days, he loved the Beer Helmet and Keg Killer series. That gnarly, backyard jamboree narrative fits perfectly with his most recent project.

The brewing company from California is big into extreme sports and is built on West Coast vibes, most notably its 805 beer.

Fletcher is hard to get a hold of and doesn’t answer numbers he doesn’t know, so Firestone Walker reached out to his grandma and presented him the opportunity. After taking a look at their Instagram and seeing mostly black and white photos, he was all in. More importantly, he was sold on the 805 team.

“They have pro surfers, they have a professional bull rider, they have an outlaw country artist, people building cars… what other team could you ride for like that?” Fletcher asked rhetorically. “They have diverse everything and I love it. It’s pretty rad. No other team is as bad ass. I was like, yeah, let’s do this.”

So they did it. Firestone and Fletcher teamed up to produce a short film (in black and white, of course), that gives great insight into who he is and the ethos they share.

In the closing moments, the producer (unseen and unheard) prompts Fletcher with the question of how he wants his film to end. In classic Beer Helmet and Keg Killer style, it ends with heavy skate clips, big barrels and some 805 Cervezas.

As the film depicts, Fletcher has been skating since before he could walk. There are photos of him rolling around on a board on his knees. When the San Clemente Skate Park was first built, his grandpa Herbie would drop him off in the morning, bring him lunch in the afternoon and pick him up after dark.

Skating was always his first love, but his style evolved from outside factors. Herbie always took him on snowboard trips to Colorado and Mammoth, and everything revolved around surfing first. Even while shredding fresh powder and ripping around the concrete, the ability to carve around like he was surfing was key.

“I just kinda do whatever,” he said. “I don’t plan runs and based off of what I’m feeling, like you do on a wave. I’ll do a lot of the same tricks over and over again because they’re the most fun to me. If I enjoy them the most, why wouldn’t I do them the most, you know?”

Fletcher lives on the line between control and chaos.

His massive airs, truck-barking lip tricks and ability to find a line where nobody else does is what makes him stand out. His attitude and amplitude are unmatched, making him exhilarating to watch.

A big part of Fletcher’s life has been his family. But for him, family extends beyond blood. He loves going on skate trips with his team and, more importantly, his friends. Skate trips are about pushing boundaries. He can’t stop chasing the rush.

In that pursuit of going even bigger, knowing that he has a group on the trips to support him is crucial.

“Your crew is going to fucking hold it down for you,” Fletcher said. “If you get fucked up somewhere, you know that your friends are going to have your back and take you to the hospital. It’s easier to push your limits when you know that you have a good crew behind you that can get you to where you need to go.”

While that may be a direct line of thinking, Fletcher doesn’t necessarily think it’s that simple. It goes beyond dangerous situations and his family taught him the importance of having a good crew of “extended family” in all aspects of life.

“You necessarily shouldn’t look at skating that way, but it’s like surfing big waves,” he said. “Those guys do it because they know their friends will throw themselves into danger for them. A good crew will grab you in sticky situations and that is the same with skating. That’s why they’re family.”

Lines beyond the board.

When he’s not dropping into a pool or getting barreled, Fletcher has found passion in art. It is something that has also been passed down to him from his family. He approaches his art like he does his skating— sporadic and unplanned.

“My grandma, my grandpa, even my uncle and my dad have been doing art forever,” he said. “My grandpa always painted his longboards and I always thought he had the raddest longboards so I wanted to do it too. I’ve been doing art on and off for a long time.”

Although it started as something fun on the side, Fletcher really began to use art as an outlet for expression when he got hurt in 2019.

He couldn’t skate for eight months because he tore all of the ligaments in his ankle and moved back in with his grandma. Unable to create lines with his board, he started to use that same creative, free-flowing mindset in art.

“It’s always super random, but that’s just me,” he joked. “If I’m going to do art I’d like to do art that lets people see skateboarding through the way that I see it. You know? That’s what I know. I know skateboarding. So I’d like to share my professional experience with them… to somebody who would never be able to see or look at it through my mindset.”

The unique, individual style that Fletcher uses to flavor his runs has brought him a lot of success. He has competed in five different X-Games, multiple Dew Tour stops, Coastal Carnage contests, the brand-new Red Bull Solus, and every local event you can imagine. His success in competitions has been immense, but that’s not what gets him up in the morning. For Fletcher, it’s all about going big and making the world his skate park.

That comes with a price.

“When you’re skating in the streets, you have to watch for cars and people fucking yelling at you while you’re trying to lock in,” he laughed. “People in Europe will throw Coca-Cola and beer bottles at you. That’s crazy. And then you’re on a time crunch because people will call the cops on you and you’re like ‘okay, fuck, now I gotta make it,’ and you’re stressing and the nerves kick in. You start messing up because the cops are coming and you know it. So then you gotta go even bigger. It’s wild.”

His most favorite adventure so far came in South Africa.

“It was a far drive, but it was a building that like… was not meant to skate,” he said.

There was a huge gap in the quarterpipe on the outside of the building that made it really difficult to land. If you didn’t come in fast enough, the gap couldn’t be closed. He was pushing himself at first and got beat up time after time. Eventually, right as the crew was about to move to a new spot, one of the guys stopped a random passerby on a motorcycle.

“The guy towed us into the spot with his motorcycle and it opened up the spot for us, it was sick,” Fletcher said. “I had never seen anything like that and the guy was so willing to stop his day and help us go huge on this random quarterpipe. We also went on a safari, which was all-time too.”

What’s next for Greyson Fletcher?

At 30 years young, Fletcher isn’t in a hurry to change much. He loves his family, his friends and going big. At the end (or beginning) of a night (or morning), nothing suits him better than an ice cold beer, and he loves living each day in the moment. With that being said, Fletcher is eyeing his next big project and it goes hand-in-hand with his lifestyle.

“I’d like to end up owning a nightclub in the Philippines with a big skatepark where people can watch,” he said, trying to speak it into existence. “I’d love to just fucking run that place and go surf every day. That would be ideal.”

He wants Dreamland to build the park because they just have the right mindset to make the gnarliest park ever, he says.

“I want a skatepark where people are scared to come in,” Fletcher said with a laugh. “I want to hear people talking about it and if you’re not prepared to push through the fear, don’t come in. Go to the bar instead and work up the courage.”

To tie it all together, Fletcher wants to get back to his surfing roots and catch a massive barrel at the legendary Pipeline.

Other than that, he’s living the life he wants to live. It’s always been his dream to skate, surf and have a good time doing it. That’s exactly what he’s doing and it won’t be any different any time soon.