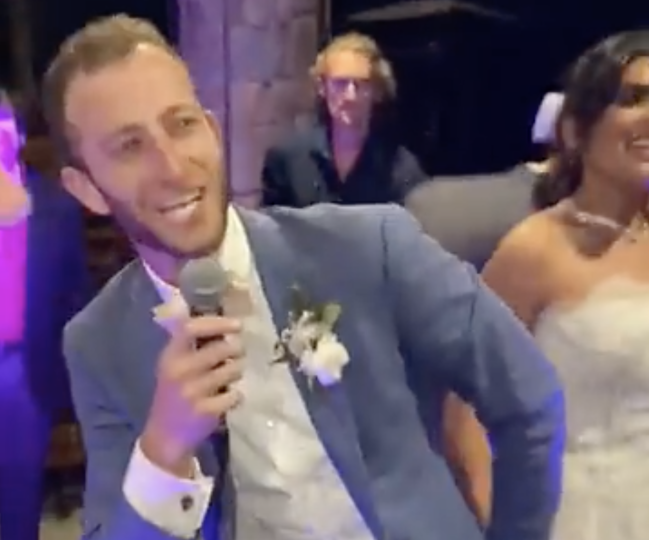 When you really think about it, the lyrics to Rick Astley’s ‘Never Gonna Give You Up’ are actually quite romantic…

One newly-married groom certainly thought so and decided to play a prank on his bride.

Last weekend, in beautiful Sonoma, California, Maxx Reiner and Hanna Ahmadi became Mr. and Mrs. Maxx Reiner. Their wedding was supposed to take place in 2020, but because things were postponed due to COVID-19, Maxx had a whole year to think about his plan of action.

Not long after saying “I do” and taking photos, the lovely couple made their way over to the reception.

As is standard, the wedding party entered first. And then it was time for Hanna and Maxx.

Upon entering the venue, the wedding band singer handed Maxx the mic. It was time for the first dance— kind of.

As Maxx led Hanna out onto the dance floor, she didn’t know what to expect. And then a familiar drum and synth began to play over the speakers, followed closely by one of the most iconic voices in music.

WE’RE NO STRANGERS TO LOVE! YOU KNOW THE RULES, AND SO DO I!

Hanna was ‘Rick Rolled’ by her husband and clearly could not have expected it less. Maxx went full savage mode.

Not only was the entire thing hilarious, but Maxx’s suit is straight flames. Well done all around, Mr. Reiner.