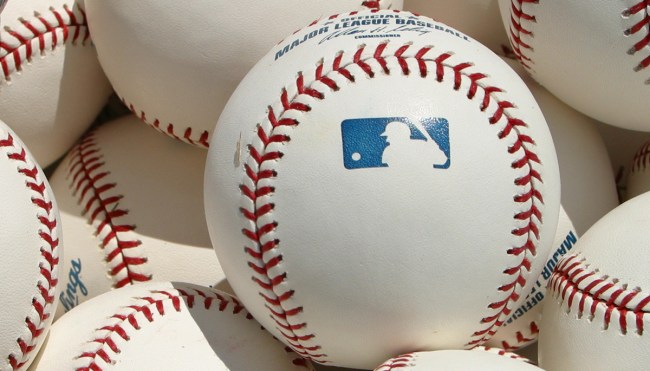 A grown man is going viral on social media after being seen shoving kids in order to get an autographed baseball. The MLB world is far from impressed by the fan’s actions.

For youngsters, getting a signed ball or jersey is one of the reasons for attending a sporting event. Kids look up to these athletes, whether that be at the college or professional level, as they envision themselves one day walking in the shoes of a superstar. But that dream, for most, ends as you get older.

And this guy is definitely old enough to realize that concept.

But instead of patiently waiting on an opportunity, he throws his arms out over the tops of the youngsters in the front row, pathetically begging for a player to sign his ball.

One kid finally gets fed up with the adult’s forearm being hanging across his face and shoulder, nudging him in annoyance. The man pushes back then voices his displeasure. Again, at a kid.

Took getting an autograph to another level 😅#AllStarGame pic.twitter.com/vbaaxYGWvj

It’s safe to say that MLB fans on social media didn’t side with the overaged bully.

This guy had absolutely no one on his side after the video went viral on social media. Here’s the immediate response from the MLB world.

Fans couldn’t help but note the fan’s resemblance to Joe Gatto from Impractical Jokers. They thought they might’ve been watching a rerun of the TruTV series, probably because the cast made fun of this exact topic in an episode of the show.

Is that Joe from impractical jokers? That episode is old

I’ve seen this on @truTVjokers before though unfortunately this may not be a joke.

This is just so cringeworthy.

Related: Zack Greinke pretends to sign a fan’s ball then throws it as far as humanly possible