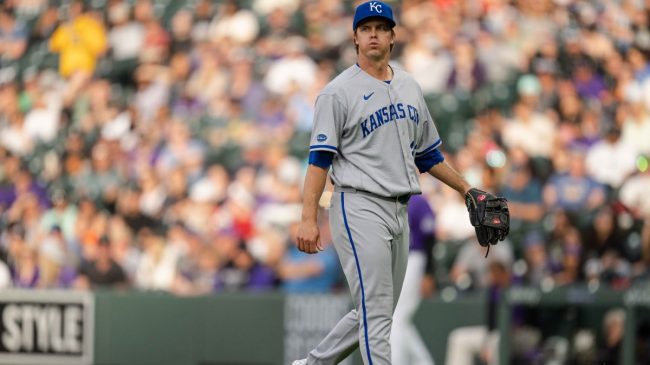 Zack Greinke is known for having one of the odder personalities in Major League Baseball.

He’s the same guy that asked to be sent back to the minor leagues before making his MLB debut. He once asked the Royals if he could start over and become a shortstop even though he was the top pitching prosect in the game. He nearly quit baseball completely in order to mow lawns.

Greinke has also had his fair share of run-ins with teammates and fans. Players have called him a loner, coaches have called him aloof, and teammates have, at times, wanted to bash his face in. He’s openly admitted to hating having fans in the stands.

He once stopped a game for a mound visit so he could ask his catcher about a fantasy football trade. He’s told opposing hitters what pitches he was going to throw only to still get them out. He throws a 95 MPH fastball accompanied by a 50 MPH eephus. The list goes on.

This video pretty much sums Greinke’s on and off the field issues up.

Well, the pitcher is making headlines once again for his downright weird actions.

You probably already guessed it, but Greinke hates the attention of fans and media. He also isn’t too fond of signing autographs. On Sunday, a story began circulating around social media involving a both.

Another chapter in the book of Greinke

Zack Greinke allegedly pretended he was going to autograph a baseball for a young Royals fan. Instead, he took the ball and chucked it as far as humanly possible.

When the fan asked why he did it, Greinke responded, “For my amusement.”

It’s hard to know if the story is completely true given the context of just a picture, but it sure seems like something Greinke would do. And there appears to be some confirmation floating around Twitter.

It was me that it happened to!

because i have been trying all year for greinke to sign my ball i caught at a game. I was the one that called him over. i thought i was about to actually get the ball signed!

Tagging the @Royals in this so that maybe Twitterless Zack Greinke might see this…. Hope you enjoyed ruining one of my players’ game experience today pic.twitter.com/BrE3jw3zwa

Wow! What a rollercoaster of emotion that must’ve been. That close to landing the autograph of a Cy Young winner only to have it chucked into the outfield stands.

But it’s also something that’s come to be expected from Greinke.