Astros Ace Zack Greinke Told Giants Hitters What Pitches Were Coming, Still Got Them Out 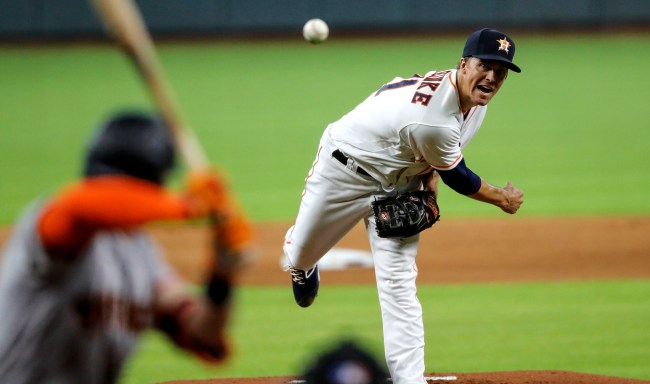 I’m not sure if this is some sort of penance for his teammates that illegally stole signs en route to winning the 2017 World Series, but Houston Astros ace Zack Greinke did his dead best to let several of the San Francisco Giants hitters know exactly what pitch he was about to throw on Wednesday night.

Even crazier than Greinke openly tipping his pitches to Giants hitters was the fact that he was still able to get them out.

At various points during the Astros 5-1 win over the Giants Greinke was giving hand signals to catcher Martín Maldonado and could even be heard (thanks to zero fans in the stands) openly talking about changing the signs.

Zack Greinke: Calling out the signs. 😂

“Today, there was a man on second base and it got all messed up and it took longer than I was hoping it would take,” Greinke said after allowing just one run in 6-1/3 innings, per MLB.com. “It’s 50 percent my fault and 50 percent Maldy’s fault. … I don’t like taking a long time with a man on second base especially. I’m trying to find a way to speed that up. So far this year, it’s been good. It got messed up today.”

Maldonado, for his part, has zero problem with Greinke calling his own pitches. In fact, he is a fan of it.

“It’s good as a catcher not to have to put down or shake a couple of more times and slow the game down,” said the Astros catcher. “He’s a guy that likes to work quick.”

There was a method to Greinke’s madness, however, as he told the Houston Chronicle after the game, “Sometimes I call the same pitch that I throw. Most of the time it’s not the same pitch.”

Sneaky. And in this case, totally legal.