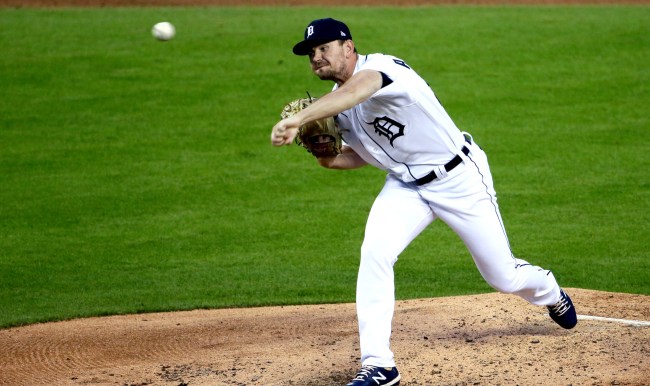 The 2020 Major League Baseball season has already been an odd one. We’ve got dang near half the Miami Marlins team suffering from the coronavirus, socially distanced bench clearing umm brawls, Dodgers pitcher Joe Kelly gloriously mocking the cheating Astros, and we’ve got teams playing 7 inning games like they’re back in high school during doubleheaders.

Speaking of 7 inning Major League Baseball games, the Detroit Tigers and the Cincinnati Reds partook in that very thing as the teams faced off on Sunday in a doubleheader.

During game one of the doubleheader, Tigers reliever Tyler Alexander set one American League record and tied another when he struck out the first nine batters he faced (which means he fanned the entire Reds’ lineup) and 10 out of 11 overall.

Those nine straight strikeouts by Alexander, 26, tied an American League record previously set in 2012 by another Tiger at the time, Doug Fister. The Major League Baseball record is 10, set by Hall of Famer Tom Seaver back in 1970.

Alexander’s nine strikeouts in a row also set a new American League record for consecutive strikeouts by a relief pitcher.

After his ninth strikeout in a row, Alexander hit Mike Moustakas, but then came back to strike out Eugenio Suarez for his 10th strikeout against just 11 batters.

Look at this ridiculous stat line…

Call him Tyler Alexander Hamilton because he was not throwin' away his shot.#DetroitRoots pic.twitter.com/MOvKccrj3e

What made the rare feat even more impressive was the fact that Alexander used an impressive array of pitches to fan the nine straight Reds with none of them being faster than 92 mph.

Watch him strikeout all nine batters in a row below…

He struck out ALL NINE. #DetroitRoots pic.twitter.com/vUyk9SziMl

Unfortunately, Alexander’s incredible outing wasn’t enough as the Tigers ended up losing the game 4-3, then lost game two of the doubleheader with the Reds Trevor Bauer throwing a “complete game” two-hit shutout.