Joe Kelly strikes out Carlos Correa. Pleasantries are exchanged … then we get our first socially-distanced bench clearing altercation of the season.pic.twitter.com/dmQElWppqd

If you thought baseball “altercations” couldn’t get any less exciting, think again. With the Marlins outbreak and the entire league seemingly teetering on the edge of total cancellation, players are more aware than ever before of the need to hold me back, bro, from wanton violence. Get ready for a new age of posturing that will make slouch-correcting chairs obsolete.

As expected, the Astros-Dodgers took center stage last night to exhibit the new formula. As the sound engineers desperately tried to score the broadcast into commercial break—knowing that every commercial break could be this season’s last—Joe Kelly’s hilarious “awww wah wah wah” face was too much for Carlos Correa’s thick skin to handle. Next thing you know, poor Geico is left holding its dick because things are about to go down.

Once the two sides come together, all bets are off.

Max Muncy intelligently, compassionately covers his mouth with his glove in lieu of a mask: 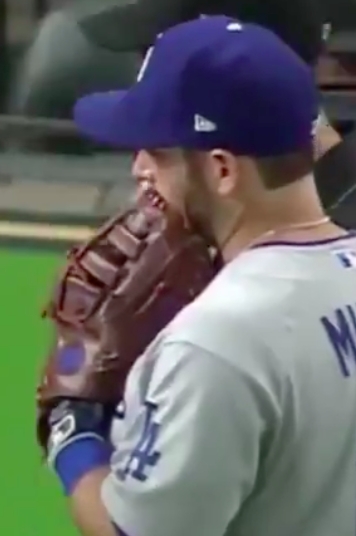 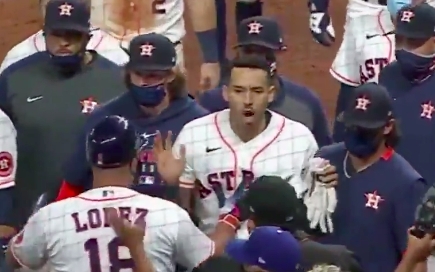 And within seconds, the ballyhoo subsides and the teams return to their quarters.

This is the new baseball “altercation.” Where last season, the majority of these scuffles would at least see players from both sides pushing and shoving, we now get to witness opposing rosters gently float together like flotsam and jetsam on converging tides. Hell, let’s throw a hazmat-suited CDC rep in there with a six-foot measuring stick just to keep things tidy.

In fairness, it’s possible the players are aware of the stakes and they aren’t letting their anger dictate really dumb decisions. Maybe they’re stopping short of fisticuffs to preserve some semblance of social distancing. Who knows. Either way, I think we can expect to see altercations of this ilk this season. For many fans who circled the date when the Astros were coming to town as a game with the potential to devolve into a UFC match, this will be a major disappoint.