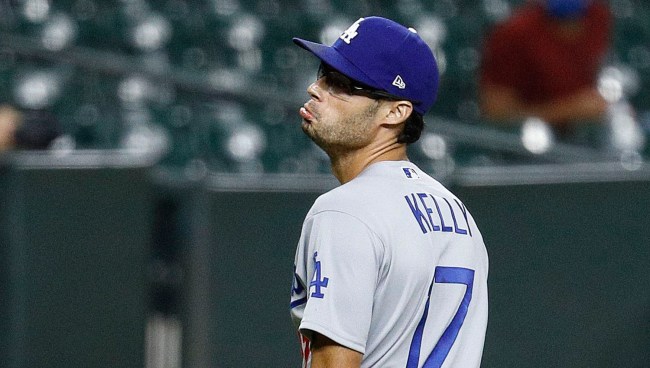 In case you missed it, on Tuesday night the Dodgers took on the Astros in Houston and as one might have expected considering the Dodgers were cheated out of a legit chance to win the 2017 World Series thanks to the Astros’ cheating, things got a little heated.

Dodgers pitcher Joe Kelly, who had double the reason to be upset with the Astros’ cheating as he was on the Red Sox team that lost in the 2017 Division Series to Houston, was the chief instigator, throwing a 96 mph fastball over the head of Alex Bregman, then later following that up by sailing a curveball over the head of Carlos Correa.

Following Correa’s at-bat in which Kelly struck him out, words were exchanged as while walking past Correa to the dugout Kelly said, “Nice swing, bitch,” and “You’ve got to cheat to hit.”

One thing then led to another and the benches ended up clearing for the knock-down, drag-out social distancing fight of the century (i.e. no one touched anyone).

After the game, Kelly broke down exactly what happened.

"It is what it is, I walked a couple of guys and was able to get out of the inning." Hear from Joe Kelly following tonight's win over the Astros. pic.twitter.com/gS3913tkRs

Baseball fans across America were understandably overjoyed by these events with Joe Kelly being hailed as a hero for sticking it to the cheatin’ Astros.

Joe Kelly is the hero we all needed pic.twitter.com/blbUeGuOmP

Naturally, because of the comical faces Kelly made to Correa as he walked to the dugout, it didn’t take the internet long to turn him into the best baseball meme of 2020.

When someone whines about having to wear a mask in public pic.twitter.com/EaYi1YVrq7

joe kelly walking back to the dugout after striking out correa pic.twitter.com/ILK6qYfoSA

Joe Kelly is what we needed during these times pic.twitter.com/d7I05KfnKA

I made a meme. Thank you for inspiring me Joe Kelly. AKA my new Sports spirit animal. pic.twitter.com/xaiD3yKeqn

When Joe Kelly took the mound to face the Astros #Dodgers pic.twitter.com/KKKA2bOp95

My reaction when you hear another Astros batter got hit this season. pic.twitter.com/lJYhZM2O2n

Younger siblings: *complaining about how hard life is*

The Dodgers and Astros go back at it tonight at 7:10 pm ET. Should be fun.