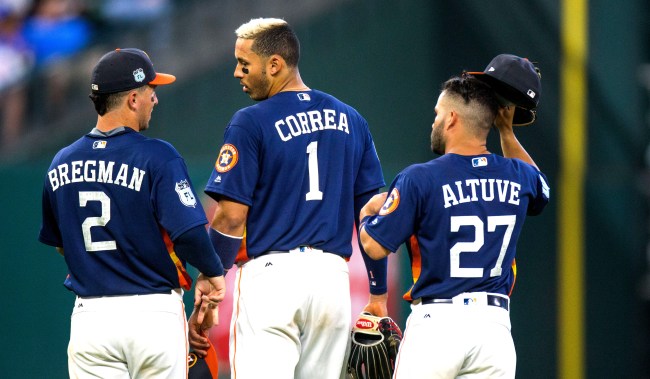 On Tuesday, Major League Baseball finally announced it had reached some sort of an agreement with the MLB Players Association and will begin the 2020 baseball season on either July 23 or 24.

MLB will be implementing a 60-game schedule with health and safety protocols agreed upon by both sides.

“All remaining issues have been resolved and players are reporting to training camps,” the MLBPA announced in a statement.

Well… not all of the remaining issues have been resolved. There is still the small matter of the Houston Astros getting away with cheating their way to the 2017 World Series title – soon to be chronicled in a docuseries produced by LeBron James’ company. Oh, and the multiple lawsuits against the Astros for cheating, those too need to be resolved.

Here’s how the truncated MLB season will go down, according to ESPN…

• Teams will play their four divisional opponents 10 times and each of the five interleague opponents in the same geographical area four games apiece.

• The National League will use a designated hitter.

• In extra innings, teams will begin with a runner on second base.

• The trade deadline will be Aug. 31, less than a month before the regular season is scheduled to end.

• Rosters will start at 30 men for the first two weeks then go to 28 for the next two weeks and stay at 26 for the remainder of the season.

• Teams will have a taxi squad that allows them to have as many as 60 players available to play in major league games.

• There will be a COVID-19 injured list with no minimum or maximum length of time spent on it, while standard injured list stints will be for 10 days and the typical 60-day stint will instead be for 45 days.

Naturally, this turn of events also meant fans could re-start their bashing of the Houston Asterisks.

Let’s not forget the most important part of this season: hating the Astros with a burning passion https://t.co/eS3tiSZmti

Baseball has, finally, figured it out and will officially be back which means it's a great time to remind you the Houston Astros cheated to win the 2017 World Series.

The Astros realizing baseball is back / realizing they're about to get beaned all 60 games pic.twitter.com/3qEzJauhtX

To Jose Altuve and the entire Astros roster…

Hey everyone, now that baseball is officially back, let's all remember the #Astros blatantly cheated to win their championship.#MLB

Dear Astros: we can hear the bangs more clearly in an empty stadium pic.twitter.com/A37Mo7HBvj

Baseball is back. I can't wait to see an Astros game. pic.twitter.com/Kys3rHze2n

Beanball season is almost upon you, Astros! pic.twitter.com/4nmVORZUWc

It’s so good to have baseball finally coming back.

I won’t believe it until the first Astros player eats a HBP in a real life game. https://t.co/BRUN7wPChD