Guatemalan Soccer Player Pulls Worst Flop Of The Year, Hits Himself In The Face With A Fallen Object 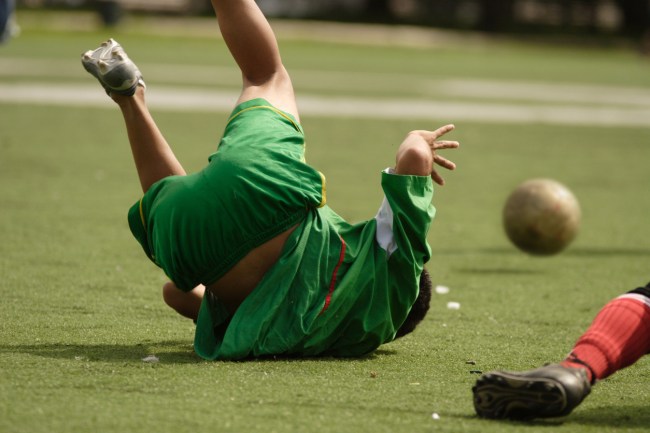 Flopping, diving, simulations— whatever you want to call it. Over-exaggeration in an effort to draw a foul is rather common in soccer, but Rosbin Ramos of Batanecos FC took it to a whole new level. The Guatamalen third division player wanted to take advantage of an object that was thrown onto the pitch and proceeded to put on an incredible performance.

While the officials were dealing with a stoppage just a few feet away, Rosbin ran over to the projectile. He picked up the object, hit himself upside the head with it and threw himself on the ground. As he was going down, Rosbin covered his face and writhed in pain.

After theatrically dropping to the turf with hopes of duping the referee into dishing out a punishment, one of his opponents walked over to Ramos, picked up the object and tossed it back over the fence. The Deportivo San Lorenzo players who witnessed the egregious attempt quickly began to surround him and shouted at him to get up.

While Ramos’ attempt to earn an advantage was outrageous, none of the officials saw it happen and thus no punishment was given out. Neither for the object being thrown nor his acting. He was allowed to return to his feet and continue the match, but justice was served and Batanecos was on the losing side of a 3-1 result.

After the video was released and began to circulate, Guatemala’s football disciplinary body got wind of the incident and is expected to take action against Ramos over the bizarre moment.