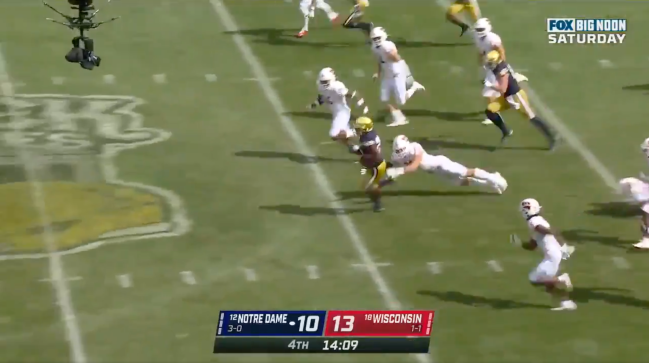 It’s a day that ends in Y, which means that somewhere in the world, Gus Johnson is losing his mind. This week, on this day, the 54-year-old broadcaster happened to be in Chicago for Fox’s Big Noon game between Notre Dame and Wisconsin.

The back-and-forth battle between two storied programs lived up to the expectations and came down to the wire. Shortly after it entered the fourth quarter, the Fighting Irish scored on the play of the game.

Wisconsin kicked off to former five-star recruit running back Chris Tyree. The sophomore from Virginia fielded the kick at the four-yard-line with quite a bit of field in front of him.

Starting in the right corner, Tyree took off to the left, got a lead block from his kick return counterpart and went streaking. He made a great move to cut back up the middle, out ran a diving defender and was gone.

At that point, Gus mode was fully activated in the booth.

As the 5-foot-9 speedster approached the goal line, Johnson gave us a tremendous countdown starting at the 30-yard-line.

When Tyree crossed the line, he hit us with a “WOOOO!” that simply can’t not put a smile on your face. Johnson is a delight.

🏡 TYREE TO THE HOUSE @chris_tyree4 takes the kick return 98-yards for the @NDFootball TD! pic.twitter.com/giCC6IwXXf

Johnson is one of the hardest working men in show business this fall. He is doing double duty with Dox for college/NFL on Saturday/Sunday but, somehow, his energy never wavers.