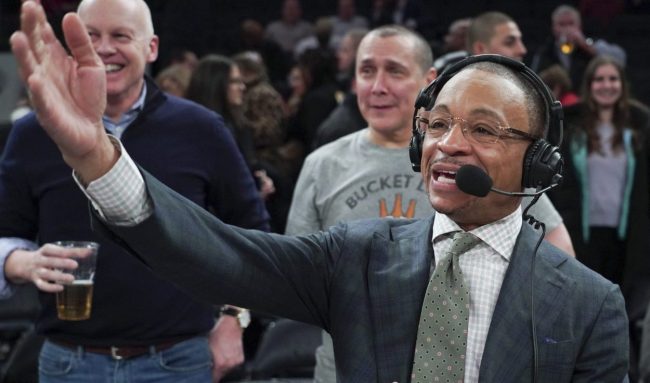 Gus Johnson is the most excitable broadcaster in sports and it’s not even close. The 54-year-old Fox Sports play-by-play man handles both college and NFL football duties and nobody gets more fired up for big plays.

During Sunday’s game between the Lions and the Cardinals, Johnson went viral for one of his vibrant calls and it will make you want to run through a wall.

Midway through the fourth quarter, Kyler Murray dropped back in the pocket, looked to his right and threw in the direction of A.J. Green. Instead of gaining the first down, the pass was picked.

Detroit cornerback Amani Oruwariye jumped the route, rolled once, hopped to his feet and took off down the sideline. Johnson went nuts.

“INTERCEPTED! ORUWARIYE DOWN THE SIDELINE!”

The Lions defender was unable to find the end zone, but it didn’t matter. We got what we wanted. Johnson called a big play, with a great name, and his trademarked “down the sideline.”

football was made specifically for gus johnson to call exciting plays done by players with cool last names pic.twitter.com/UTGEAacriO

It was the perfect combination of factors and everybody took notice. Whenever Johnson is on the call, chaos is in order.

In the Gus Johnson voice, of course. https://t.co/iDrtQEycl0

I swear it's impossible for Gus Johnson to call a normal football game https://t.co/khW3tNYVJr

To make things even better, the one-win Lions went on to upset the 10-win Cardinals. It was one of the craziest games of the year and having Johnson in the booth made the entire experience just that much better.