Remember That Random Guy Who Ran Into The Octagon To Protect McGregor At UFC 229? Yeah, He’s Banned 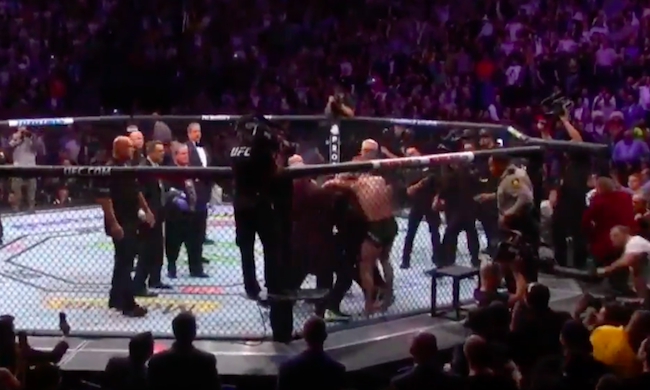 One of the oddest things to take place in a night FILLED with odd things happening at UFC 229 was when a random fan jumped up and ran into the octagon to help protect Conor McGregor in the madness that followed his loss to Khabib Nurmagomedov.

After it happened, UFC light-heavyweight and heavyweight champion Daniel Cormier told the story of how this guy basically jumped over him into the octagon during the brawl.

I (later) asked my wife, ‘Salina, what happened with that guy? Was he with McGregor?’ She goes, ‘Daniel, after he went and checked to make sure Conor was OK, he just got back in his seat.’

What happened was this man, 41-year-old David Martin from Dublin, thought his hero Conor McGregor’s life was in danger so he just acted on impulse.

@arielhelwani @ForTheWin @dc_mma glad you liked my jacket 👊🏻☘️. There is another story to my first Octagon appearance. pic.twitter.com/2sBJFhQODj

Speaking to For The Win, Martin explained, “I thought Russia was attacking Ireland. I thought a bunch of Russians were jumping in and this guy (McGregor) was tired and beaten down from the fight and was being attacked by what I thought were a bunch of Russian fans. I needed to step in. I was thinking my country was calling for me right now and I’m going in.”

The story of how he actually got into the octagon in the first place is equally amazing.

“I jumped on Daniel’s back and put my arms around him and pleaded with him not to go in. My arms were around him and he couldn’t get over the rail and I thought, ‘Jesus Christ, this guy is gonna turn around and throw me to the ground for hanging on to him.’ I kept saying to him, ‘Your kids are here. Your kids are here.’ He calmed down and as he calmed down I saw the guy in the red shirt jump over the rail and I thought, ‘Oh Jesus, Conor has nobody in there with him.’

“Conor was about to get attacked. I put my hands on top of Daniel to leapfrog him because he’s not that tall. I leaped over him and saw the door (to the Octagon) open and I wanted to get in there and protect my countryman. I thought there were all Russian guys in there and I wasn’t having that.”

In a since-deleted Instagram post, Martin shared shared a letter from the UFC telling him “as of this date, you will no longer be permitted to attend any UFC event hosted at the arena, or any other arena inside or outside the United States, until further notice.”

Marting also shared a 564-word reply he wrote to UFC Chief Legal Officer Hunter Campbell defending his actions, saying, his actions “were of a unique circumstance, they contributed to the peace in the arena and ultimately to the well being and safety of the athletes, the attendees, and arena employees.”

He closed by saying that while he accepts the ban, for now, but once they see his logic andthe ban lifted, he gets “the seat of my choice for the next Conor McGregor card.”

You can read his entire letter here.