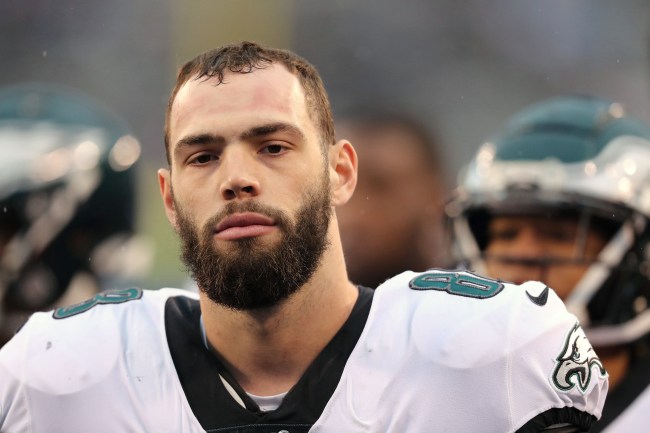 Two weeks ago, Eagles tight end Dallas Goedert attended a South Dakota bar that looked like it hadn’t changed its kegs since Bush was in office.

The 25-year-old South Dakota State product ended up on the grimy floor of Zoo Bar after what appeared to be the most unforgivable sucker punch since Shawn Michaels superkicked Mart Jannetty two decades ago.

Here is video of Eagles’ TE Dallas Goedert being sucker-punched at the Zoo Bar in Aberdeen, S.D., via ⁦@SamStompy⁩. pic.twitter.com/2DeuvDy67s

At the time, Eagles beat reporter Mike Kaye claimed Dallas was at the bar with his family when he was sucker punched, completely “unprovoked.”

That is rarely ever the case, and puncher Kyle Hadala, who was hit was a simple assault charge, has a totally different story about how things went down.

Hadala claimed Goedert and his friends had been “harassing” his group at a previous bar for the choices they selected for the jukebox. If that ain’t South Dakota, I don’t know what is.

“They were extremely aggressive and disrespectful,” Hadala says.

The group moved to a new spot — the Zoo Bar — but Hadala says Goedert and his crew followed them with bad intentions. Very soon, according to Hadala, the situation escalated.

“They picked out my smaller colleague from the group, got in his face, and made very threatening remarks toward his personal well-being,” Hadala tells us.

Hadala would not stand for the fat-shaming, and decided this juncture was a good time to throw hands.

“At this point, I was in fear for both of my friends’ well-being especially due to the fact there were 10 of them and we were not familiar with the area,” Hadala says.

“I protected my friend and then was ambushed by 5 to 7 individuals that punched, kicked, threw beer bottles, etc., trying to cause me bodily harm which I received medical treatment at the hospital for my injuries the next day.”

Hadala suffered some intense injuries himself, received multiple lacerations in the incident, which required several stitches and staples to close the wounds.

Video: Kyle Hadala Who Sucker Punched Eagles TE Dallas Goedert Tells His Side Of The Story And Says It Wasn’t A Sucker Punch; Says Goedert And His Friends Were Being Bullies https://t.co/plvyKhgnTs pic.twitter.com/bFETjuJKQs