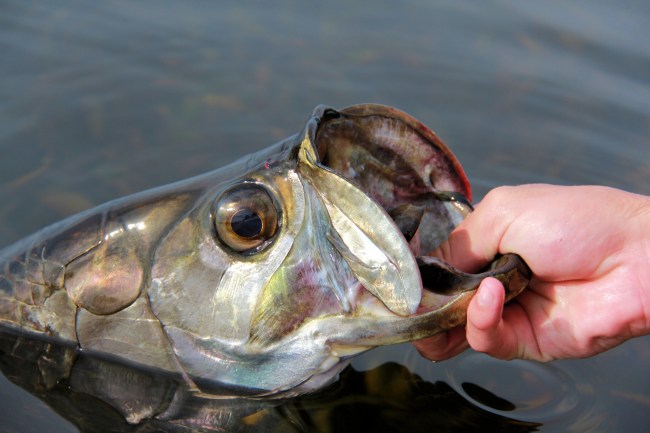 Tarpon fishing season in Southwest Florida is usually pretty predictable. The peak fishing months for tarpon generally run from late Spring until early Summer, from sometime around the end of May through early July, but this year has been different and these Silver Kings have stuck around.

I’ve heard reports from local fishing captains who specialized in Gulf Coast tarpon that they are catching as many fish right now in mid-August as they were in mid-June at the height of the season. For whatever reason, the fish just don’t want to leave this year.

This is GOOD NEWS for recreational fishermen looking to catch one of the most sought after sportfish in the world, the tarpon aka ‘Silver King’. It’s also great news for hammerhead sharks who see tarpon as a delicious meal the way most guys see a bone-in ribeye steak.

Capt. Rob Gorta is a local fishing guide in the greater Tampa Bay area who, like most of the local guides, carves out several months each year to target tarpon. Last week he landed a great-sized fish and was taking a video of the release. It’s illegal to take tarpon out of the water because they’re a protected species in this area. And as he as releasing the fish a ABSOLUTELY MASSIVE hammerhead shark popped up out of nowhere.

Typically, if a fisherman is fighting a tarpon and they spot a shark trying to eat the fish the protocol is to flip open the bail on the reel and let the fish swim freely so that it can hopefully manuever away from the shark. But in this instance that wasn’t really possible since he was holding the shark and the hammerhead sunk its teeth into the tarpon so quickly.

You can hear him hollering “He just took it out of my hand!” and I’m half wondering if that was for the other person in the boat or the other nearby boats who were probably wondering what the hell just happened.

The captain told local WFLA news that the hammerhead shark was easily more than 14-feet-long and weighed over 1,000-pounds and judging by the video footage I’m inclined to believe him.

Fishermen are super judgemental on the water and locals hate to see tarpon get eaten by sharks, but as you can see in this footage there really wasn’t a damn thing he could do because it all happened so quickly as he was trying to revive the fish and release it at full strength after a fight.

This all went down off of Anna Maria Island which is located at the southern tip of Tampa Bay (the actual bay, not the geographic region). For several years now, Anna Maria has been home to some of the hottest tarpon fishing in the world during the Summer months.

You can catch tarpon year-round in the Florida Keys and in the Caribbean but they show up in HUGE NUMBERS from Tampa Bay to Boca Grande, Florida in the Summer and Anna Maria’s one of the best places in the world to land one.