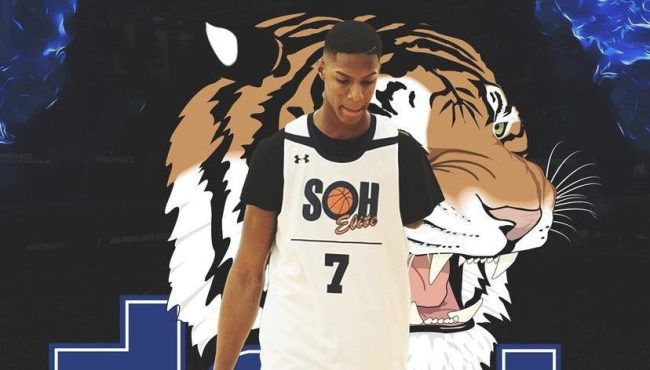 Hansel Emmanuel Donato Domínguez lost his left arm at the age of six and just earned his first Division-I basketball offer. As a child, Hansel was playing at his home in the Dominican Republic when a wall collapsed on top of him, trapped him underneath the rubble for nearly two hours, and caused him to have his arm amputated.

Blessed to receive my first D1 offer from Tennessee State university #gotigers Thank you for be believing in my talents ⏳7️⃣💙🙏🏽@coachpenny1 @TSUTigersMBB pic.twitter.com/SVrnMGchB8

Hansel recently moved to the United States on a scholarship to play basketball at Life Christian Academy in Kissamee, Fla. and he’s so nasty.

Even with one arm, Hansel consistently sauces up defenders. He can be seen all over the internet making his opponents look silly at AAU tournaments.

Tennessee State is the first of many offers to come. Hansel wants to take basketball as far as it will take him and has proved his abilities.

He does things with one arm that a lot of people with two wish that they could. The 16-year-old recently competed in an AAU dunk contest and absolutely threw down.

Every week I say there’s nothing Hansel Emmanuel can do that will top what he did last week.

He just pulled off a between the legs dunk with 1 arm. The kid is amazing. pic.twitter.com/W1hHKpOoqC

When it comes to his in-game skillset, it’s not even close. Other players on the floor can’t keep up with him.

He can shoot from downtown, dish with the best of them, plays lockdown defense and has wicked handles. Initial thought for a defense trying to stop him would be to make him go left.

Hansel, despite having only his right arm, can do that too. He’s the whole package.

Tennessee State, which competes in the Ohio Valley Conference, is an HBCU located in Nashville, Tenn. If they land Hansel, who is listed as a three-star recruit, it will be their most underrated signing with the highest ceiling.

Hansel has only been in the States for less than a year so his potential is untapped and fairly undiscovered. Now that TSU is in the mix, the dominoes will only continue to fall.