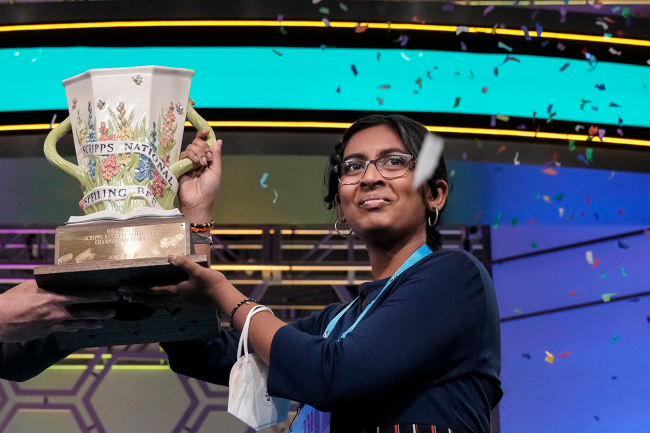 Thursday night’s Scripps National Spelling Bee was absolutely exhilarating. It came down to a final spell-off that was remarkably stressful, but the winner was absolutely dialed-in and dominated.

Prior to the final round, a new twist to the Bee has caused quite the stir. An onstage vocabulary round was introduced this year and it did not go over well with competitors or fans.

Rather than spelling, which is what the Scripps National Spelling Bee should be about, the multiple-choice vocabulary questions asked spellers to identify definitions of words and phrases like ‘Stockholm Syndrome,’ ‘leitmotif,’ ‘vermillion,’ or ‘sirtaki’ — a Greek dance. It quickly knocked out five of eight competitors.

The vocabulary round was Scripps’ way of making sure that the competition is not about memorizing words and their spellings like code. It caused quite a bit of outrage.

“I thought it was tragic,” said Grace Walters, a coach to multiple previous Scripps champions, to The Associated Press.

they really eliminated 5 of the 8 kids because of a multiple choice round in a SPELLING BEE 😵‍💫 #spellingbee pic.twitter.com/QhMGYSAJDB

why is no one talking about the utter desecration of our national spelling bee as they require kids to answer multiple choice definition questions.

When did the spelling bee add multiple choice questions in lieu of spelling??? This seems v unfair

I would vote against repeating the word meaning portion of the “spelling” bee. This is about SPELLING (difficult or less common) words; not multiple choice guessing of word meanings. #ScrippsNationalSpellingBee

The multiple choice “word meaning” round of the #SpellingBee is NOT spelling and it IS complete bullshit and I am MAD ABOUT IT.

being eliminated on a multiple choice question in a SPELLING BEE?? that’s so sick 😭

Uh, they’re giving the spelling bee kids multiple choice questions ABOUT words? That feels like something that nobody truly asked for.

Something Scripps will have to grapple with, or not, if it wants to continue doing onstage vocabulary words: the lack of drama. There is tension inherent in spelling a word letter by letter that's missing in answering a multiple-choice question.

Im watching this Scripps national spelling bee and buddy done missed a multiple choice question on “What is a remoulade?” 🤦🏾‍♂️🤦🏾‍♂️🤦🏾‍♂️🤦🏾‍♂️

When did the @ScrippsBee turn into a bar quiz and not a spelling bee? They’ve added multiple choice questions?

And to make things even crazier, the eventual Scripps National Spelling Bee winner was eliminated during the vocabulary round.

Harini Logan, a 14-year-old from Texas, was given the word ‘pullulation’ and defined it as the nesting of mating birds. Scripps said she was incorrect, saying that the word is a swarming of bees.

It was not the end of her night, however.

“We did a little sleuthing after you finished, which is what our job is, to make sure we’ve made the right decision,” said lead judge Mary Brooks. “We [did] a little deep dive in that word and actually the answer you gave to that word is considered correct, so we’re going to reinstate you.”

From there, Logan went on to the finals. At that point, Scripps turned to an unprecedented lightning round spell-off.

Whomever spelled the most correctly in one minute and 30 seconds won. It was insanely stressful.

It will be curious to see if Scripps makes changes in 2023. Either way, the spell-off was unbelievably electric.