“This Is A Bit Like My Bedroom”, BBC Anchor Says While Looking At The Women’s National Soccer Team 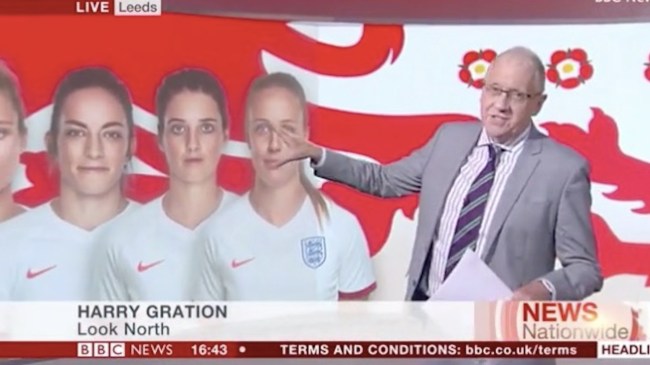 Being a news anchor is largely a thankless job.

Sure, most of them get paid quite handsomely, but their job largely consists of delivering bad news to half the population while the other half of the population ridicules them for their network’s political leanings.

And perhaps worst of all, they conduct most of their business under the added pressure of being on live television. It occasionally takes my brain two or three tries to remember why I even bothered to walk into a room, let alone what to say when disseminating vital information to the masses.

My man Harry Gration over at BBC paid the price of the real-time nature of being a television anchor, as he absolutely botched a joke (?) about the England Women’s National Soccer Team.

According to Daily Mail, Gration — who is a broadcaster on a program called Look North — was transitioning to a segment about the Women’s National Team when an image of some of the team’s players appeared on the screen.

Because he had no time to fully wrap his head around what he was about to say, Gration clumsily said “this is a bit like my bedroom at home” while gazing at the players.

Realizing his error as soon as the words left his lips, Gration immediately tried to retract, adding “not with the ladies, I hasten to add, but the colors are the same.”

But it was no matter, the damage was already done, and within hours, a website on the other side of the pond (hint: us) are already writing about it.

You’ve likely never heard of Harry Gration before, but now that you have, you’ll probably always remember him as that pervy newscaster from the United Kingdom.

You know what they say, Harry… life comes at you fast (I’m kidding Harry, keep it in your pants, chief).