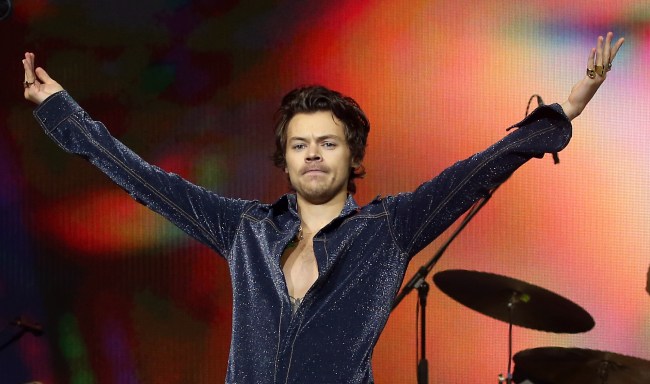 Harry Styles is not exactly known for his college football fandom. However, he has Arkansas fans swooning over him after a recent performance.

On Wednesday night, Styles performed in front of a 70,000-person, sold-out crowd at Simmons Bank Arena in North Little Rock, AR. At one point during his performance, he got into a conversation with one of his fans about her late grandmother.

The fan held up a sign that read “I spent my grandma’s will money on this.”

In response, Styles said, “what was her name? Dee. Make some noise, she used her grandma’s will money for this, I think that deserves a cheer doesn’t it?”

The crowd gave a rather large round of applause, but Styles was not done there. He then turned to the arena and asked whether he should ‘Call The Hogs,’ in grandma Dee’s honor.

Of course, the stadium went bonkers.

‘Calling the Hogs’ is a tradition for University of Arkansas students, alumni, and sports fans. It is said to have started in the 1920s and mimics a call that might be used to gather pigs on a farm.

Styles started things off with a big “Wooooooooooooo!” and the crowd took it from there.

Styles, who is from the UK, was thoroughly entertained by the call-and-response cheer. He had a big smile plastered across his face as he led the hog calling.

Just look at the pure joy he experienced in that moment:

THERES SO MANY HOGS pic.twitter.com/NQRx4Mk8XV

After wrapping up the cheer, Styles exclaimed “and that is why Arkansas is the best!”