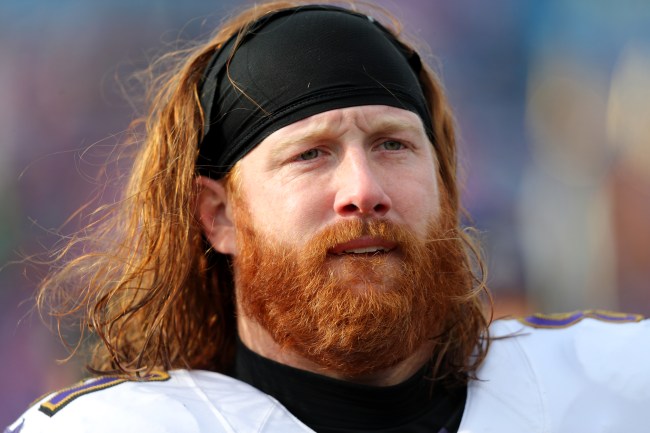 Baltimore Ravens tight end Hayden Hurst has achieved more in his 26 years than most of us could dream in a lifetime.

He signed with the Pittsburgh Pirates for a $400,000 signing bonus, walked on to South Carolina’s football team and became First-team All-SEC, first round pick by the Ravens signing a four-year $11 million deal with a phat $6 million signing bonus, Game of Thrones extra maybe.

The Ravens dropped the rope separating the players and the fans to bring them together. Hayden Hurst and Mark Andrews sign autographs for fans. pic.twitter.com/smLSDBe6ni

But as we’re learning time-and-time again, success is a non-sequitur to well-being.

While at South Carolina, Hurst woke up handcuffed to a hospital bed after he blacked out and cut his wrist in his apartment.

The 26-year-old has started publicizing his struggles with anxiety and depression that he claims was exacerbated by his baseball struggles as a minor leaguer with the Pirates. Hurst, who walked away in his second season after being affected by “the yips,” was drinking every day to deal with falling short of his own expectations.

This is what the yips looked like for former MLB prospect Hayden Hurst, now projected by many to be the first tight end taken in the NFL draft. pic.twitter.com/eP7owr3z7P

“There were weeks at a time I would sit in a dark room and not want to be around people,” Hurst told First Coast News this week. “Just that fear of embarrassment. I had never experienced anything like that.”

Hurst’s mental health didn’t improve even after being accepted as a walk-on to South Carolina’s football team.

“I woke up in the hospital,” he recalled. “I didn’t know what happened. I had to have a friend fill me in. Apparently, I had been drinking and went into my apartment and cut my wrist. My friend found me in a puddle of blood. He called 911.”

The Jacksonville, Florida native had his “come to Jesus” moment while cuffed to the bed, asking himself, “What happened? What are you doing?”

Now, the Ravens tight end is motivated to use his experiences to teach kids to not “equate mental illness with having to be ashamed.”

“I don’t have the answers to fix all of this,” he said. “It’s still a trial and error to this day, but I will say I have much more good days than I do bad days. I’m not this superhero that’s portrayed on TV. I’m a regular person. I struggle with depression, anxiety and things like that.”