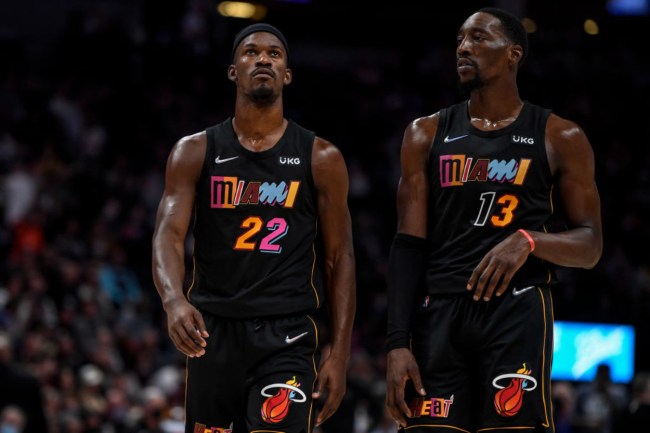 Things escalated quickly toward the end of the Heat-Nuggets game on Monday night when Nikola Jokic and Markieff Morris got into it.

With Denver up big in the fourth quarter, Morris bumped the reigning MVP rather aggressively just beyond midcourt. Jokic didn’t appreciate the foul and immediately ran at Morris and shoved him from behind. Morris hit the floor hard after the 6-foot-11 big man came crashing in on him.

Both Jokic and Morris were ejected from the game while Jimmy Butler, who was talking all sorts of trash following the play, was given a technical foul.

Things eventually did cool off between both teams and the Nuggets went on to win the contest 113-96, but the Heat wanted a postgame word with Denver, specifically Jokic.

An intense postgame photo shows some Heat players gathered in the hallway ready to confront the Nuggets. The charge seems to have been led by Butler. Many pointed out that the man in the suit in the photo is Heat general manager Andy Elisburg.

You’ll have to scroll to the final photo in the Instagram post to see the picture of Heat players standing in the hall.