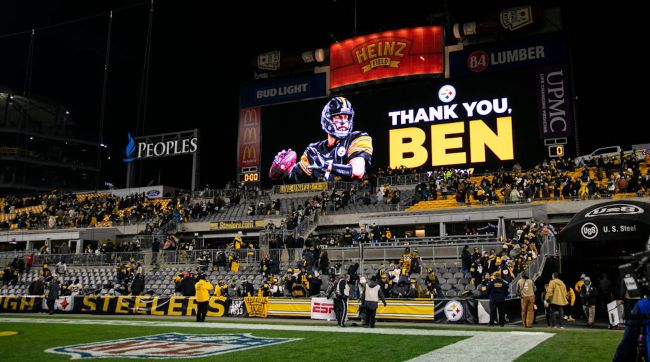 On Monday morning, it was announced that the Pittsburgh Steelers will not be renewing their stadium naming rights contract with Heinz and therefore will be renaming Heinz Field.

It appears that Steelers fans won’t have to wait long to find out their stadium’s new moniker, either, as a report from 93.7 The Fan’s Andrew Fillipponi claims that Pittsburgh’s new home will be renamed Acrisure Stadium. Acrisure is a Michigan-based brokerage firm.

Breaking: The ketchup bottles are coming down. Heinz Field will be renamed Acrisure Stadium. After the Michigan-based insurance brokerage firm. An official announcement could come as soon as Tuesday.

Heinz Field opened in 2001 and currently serves as the home field for the Pittsburgh Steelers and University of Pittsburgh football teams. Following the name change and re-branding, things will likely look a little bit different, including the giant Heinz ketchup bottles that sit above the endzone on the open end of the stadium. [via CBS News Pittsburgh]

The Steelers going from Heinz Field to Acrisure Stadium pic.twitter.com/nkpkqjZxhi

I feel like Heinz Field is like the sears tower or the staples center. Change the name all you want. It’s Heinz field https://t.co/nX2qUz2OlU

Looking at the new name of Heinz Field: https://t.co/ZwOXZ64bWF pic.twitter.com/XWpU1gw8V1

I will still call it Heinz Field. I hope you’ll join me in doing so.

Heinz Field is changing its name to Acrisure Stadium, after its new sponsor, a Michigan-based insurance company.

This is the worst thing to happen to Heinz Field since Bane. pic.twitter.com/ntaZclQoCZ

“I’m going to keep calling it Heinz Field anyway,” is exactly why Heinz decided, hey, maybe we don’t need to spend $57 mil to get people to eat ketchup.

I have decided Iron City Field sounds like a great name to replace Heinz Field.

Acrisure??? What the hell is Acrisure Stadium? I understand it has absolutely no bearing to the product on the field but it doesn’t make it suck any less. Heinz Field Forever.

& others can spend money & we will never acknowledge their existence

“A insurance company from the butthole of Michigan that doesn’t even have a Wikipedia has purchased the naming rights to Heinz Field.”

Ok, Three Rivers it is then.