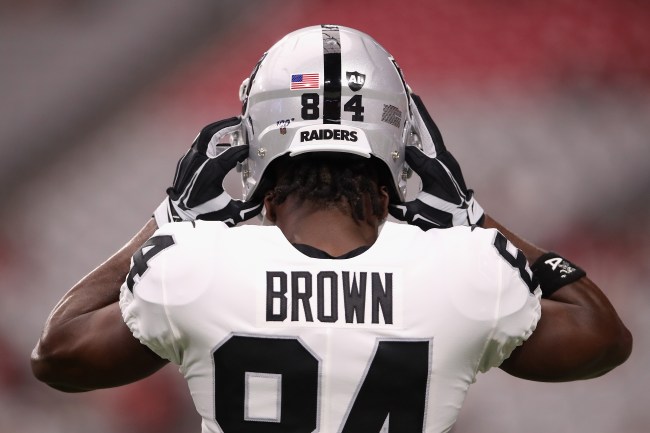 Antonio Brown is going to have to find a new helmet to wear.

After several weeks of fighting the NFL for not allowing him to wear his old helmet, Brown signed a deal with Xenith to wear a custom helmet this season on September 4th.

Raiders WR Antonio Brown has announced he has joined Team Xenith and will use their new Shadow helmet this season(pictured with an XRS-21S mask). AB used the Shadow on 8/28, but used a Schutt Air XP as recently as 9/2. pic.twitter.com/ds6MoRliTT

@AB84 might be the smartest guy in the NFL. Cause a little helmet issue, then profit off it. Brilliant. Brown's New Helmet ad Xenith Shadow. That'll help pay the fine. #XenithIsBoomin #8NN pic.twitter.com/RqYaJX5zyG

Brown has since been released by the Raiders and been accused of committing sexual assault since he signed his deal with Xenith.

It seems like all the AB drama was too much for the helmet manufacturer t man and they decided to cut ties with the wide receiver today.

Press release statement From Xenith …. AB is out! pic.twitter.com/PWZgmLHikS

The helmet manufacturer, Xenith, has decided to end its relationship with Patriots’ WR Antonio Brown.

“We look forward to seeing the Xenith Shadow worn by football athletes at all levels of play this fall,” the company said today.

It’s not clear which helmet Brown will choose to wear this season but it’s doubtful that he will get another endorsement deal while the controversy surrounding him.