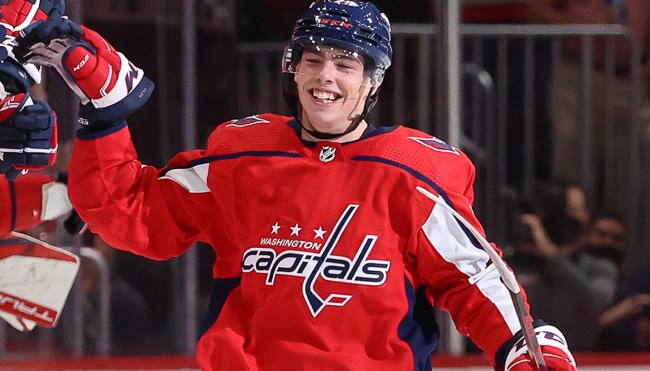 It can be kind of hard to truly appreciate the level of talent possessed by the professional athletes who regularly and effortlessly treat fans to superhuman stunts most people could only dream of pulling off—especially when you consider many of them have some incredible casual reactions to feats that would make the typical person flip out like the guys in a Dude Perfect video after drilling a wild shot.

It can also be hard to appreciate just how much time and effort the pros put in to reach the highest level of their sport, as most people who get paid to play a game for a living had to devote a good chunk of their life to realizing basically everyone’s childhood dream.

On Wednesday night, Washington Capitals rookie Hendrix Lapierre got to live out that fantasy when he made his NHL debut. Prior to the game, he got to soak in the atmosphere when he took to the ice by himself for a lap during the pregame skate, but that moment had nothing on what would unfold a couple of hours later.

Next up we have #HendrixLapierre getting his rookie lap followed by the rest of the club for pregame warmups. #ALLCAPS pic.twitter.com/E4AC2m2yi8

Shortly after the Caps scored to make it a 2-0 contest in the second period, Lapierre found himself with the puck on a platter courtesy of an incredibly slick pass from T.J. Oshie and took full advantage by depositing it in the back of the net to score his first NHL goal and give Washington a 3-0 lead.

The rookie crashed into the boards but quickly bounced back up to treat us to one of the most genuine celebrations you’ll ever see.

The celebration continued after the Capitals walked away with their first win of the season, as Lapierre got a special congratulations from Alexander Ovechkin before heading back to the locker room to pose with the puck and reflecting on the moment during a press conference.

OVI FACEWASHED LAPIERRE LMFAO, THIS IS SO CUTE AHH pic.twitter.com/kZLIkdt8FG