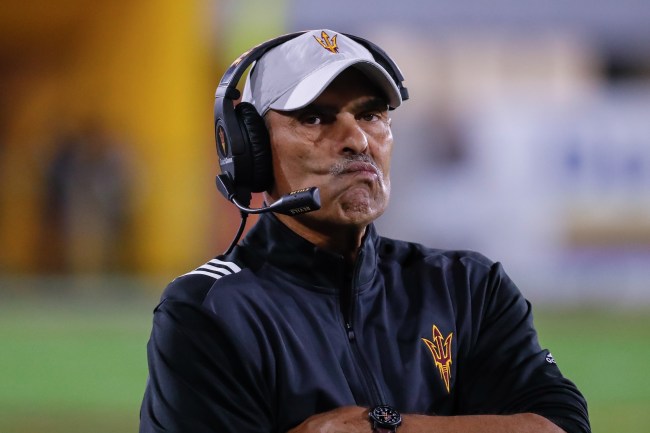 Tomorrow’s college football game between Arizona State and the University of California at Berkeley has been cancelled due to COVID-19 limitations, the Pac-12 announced on Friday. Due to a coronavirus outbreak within the Sun Devils’ program, they do not meet the required minimum number of scholarships available and are unable to play.

Head coach Herm Edwards is among those who tested positive, the school announced.

“In the past few days our test results included a number of positive cases, including multiple student-athletes and coaching staff members, one of which is Head Coach Herm Edwards,” said ASU athletic director Ray Anderson in a statement. “This put our team below the Pac-12’s minimum threshold of 53 available scholarship student-athletes under the league’s game cancellation policy.”

Arizona State played its first game of the season last week against USC and lost on a late comeback from the Trojans. They lost the opportunity to bounce back this week with the cancellation. However, there was a chance that this game may not have happened anyway.

The Golden Bears’ entire defensive line was out this entire week due to contact tracing protocols that stemmed from one case that popped early last week. The player’s positive test caused Cal’s season-opener against Washington to be cancelled last weekend and cast doubt on Week 2. Those within the program were increasingly optimistic that the team may have been able to play, with the possibility of a game on Sunday, but it won’t end up mattering in the end.

In the same statement issued by the university, Edwards discussed the situation.

“As I’ve stated many times over, the health, safety and well-being of our student-athletes is absolutely paramount and we will not put them at risk,” Edwards said. “Our team has worked extremely hard to get to this point, and even played a game last weekend. We will continue to care for our students-athletes and follow all protocols very thoroughly as we prepare for our next game. Our team and coaching staff are disappointed, but we do understand what we are dealing with.”

It may be difficult for Arizona State to clear protocol before next weekend’s scheduled matchup against Colorado, and Cal will have to wait until then to open its season against Oregon State. The Pac-12 was one of the last conferences to return to play this fall, and the ramifications from multiple cancellations in a six-game season will be widespread.