Golf World Reacts To Hideki Matsuyama Being Disqualified From The Memorial 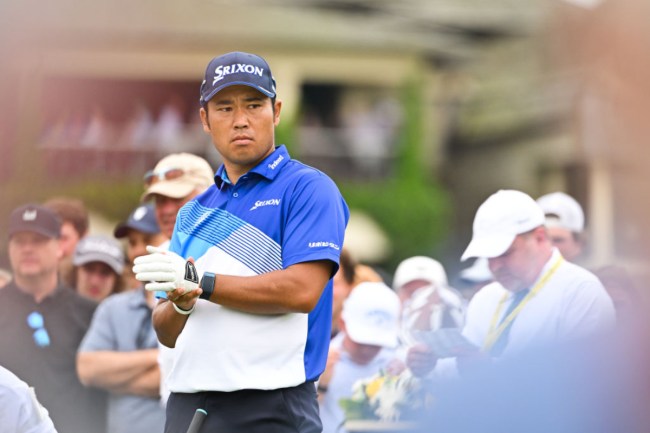 Hideki Matsuyama was disqualified during the opening round of The Memorial on Thursday for having a non-conforming club in his bag. It marked the first time the 2021 Masters champion had been DQ’d in his career.

Specifically, Matsuyama had markings around the center of the face of one of his fairway woods.

Hideki Matsuyama gets DQ’d for a marking on the face of his fairway wood.

The 📸 🐐 @gdm43pga managed to snap this one of Hideki’s at Muirfield. Gotta assume the white areas, which were likely meant to frame the face and center, caused the DQ. Wild stuff. pic.twitter.com/Ek4Oj1xeH9

Chief Referee Steve Rintoul explained the ruling and situation to the Golf Channel.

Rintoul admitted that rules officials had learned that Matsuyama may be carrying a non-conforming club right after he began his round on Thursday.

Players can carry a non-conforming club, but they just can’t use it. As Rintoul explained, a rules official approached Matsuyama on the second hole and asked if he had used the club at that point in the round, and unfortunately for Matsuyama, the answer was yes.

Matsuyama was paired with Patrick Reed and Rory McIlroy on Thursday, both of which shook his hand before he had to leave the course.

Hideki Matsuyama is DQ’d from @MemorialGolf after his 3-wood was found with a white out material on the face. This was put their by his club rep to help with alignment but @PGATOUR rules official determined the substance was too think and altered the club. Not intentional.

Not Hideki Matsuyama playing with Patrick Reed and Hideki being DQ'd.

Surely Reed had nothing to do with this. pic.twitter.com/0SkycYVw4t

Hideki Matsuyama really hit a shot that ended up on a bridge and got disqualified from the tournament, all in one round. pic.twitter.com/qZs8Rr2xRA

In the wake of the Saudi lead LIV events coming up, this petty DQ of Hideki Matsuyama is really ill timed from the PGA Tour. Ridiculous to disqualify him for having a Sharpie mark on his driver. #MemorialTournament 🏌️⛳