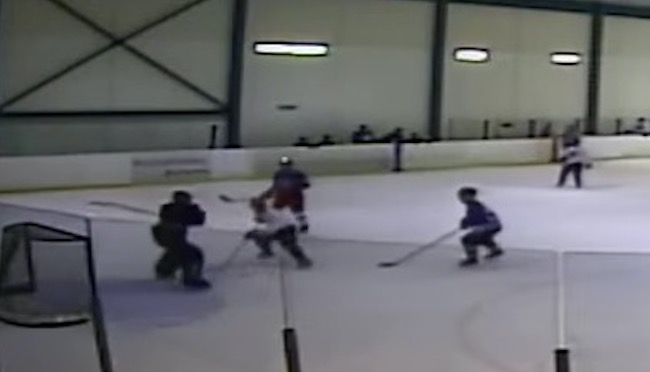 A Candian man’s been jailed for 30 days after he ‘slashed’ an opposing player to the face during a game. Todd Ball was playing goalie during a local 3-on-3 tourney, drunk, and he can be seen on camera slashing the victim (Ryan Cox) in the face with his hockey stick. Todd Ball hit Ryan Cox so hard with his hockey stick that it shattered Ryan’s nose, caused a concussion, fractured his orbital bone, and led to facial reconstructive surgery.

As you can see below, this isn’t a routine ‘slashing’ call in hockey. this is straight up assault, and thankfully the judge saw it that way too and sentenced Todd Ball to 30 days in jail for assault. The assault happens in the beginning of the clip (GIF below as well). Be on the lookout for the goalie swinging his stick into Ryan Cox’s face:

Here’s that action once more in GIF, in case you need a better look at it:

According to the St. Catherine’s Standard, 38-year-old Todd Ball of Fort Erie will serve his 30-day sentence on weekends (broken up), and he was also sentenced to an additional year of probation for this assault. They also spoke with the victim of the assault, Ryan Cox, and it sounds like his life is hell now:

“He only got 30 days for breaking someone’s face. My life has never been the same.
“I can’t feel my face. It is numb. I get bad headaches. It is hard for me to sleep. I’ve had facial surgeries and reconstructions. The sentence was too lenient. It’s an injustice. It’s ridiculous.”

It’s kind of bullshit that this man’s face and life were ruined by a drunk asshole and the guy only has to spend a couple of weekends in jail. For more on this story you can follow that link below!