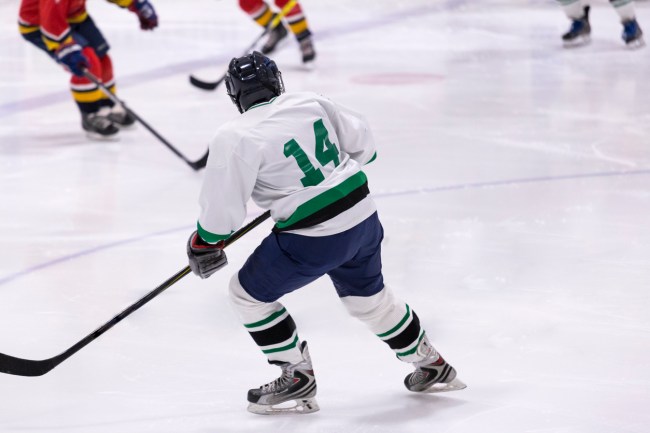 One hockey team was so short-handed that the team’s owner laced up the skates and hit the ice. Going from the front office to the professional hockey game is difficult enough, but the owner was also 55-years-old out there on the ice racing up and down against 20-something-year-olds.

The Elmira Enforcers are a hockey franchise hailing from New York in the Federal Prospects Hockey League (FPHL), a professional ice hockey league with 10 teams in the midwestern, southern, and northeastern United States. On Friday night, the Enforcers were taking on the Danbury Hat Tricks from Connecticut, except they had one major problem — they had six players who were unable to play in the game. So they turned to the team’s owner Robbie Nichols.

The Enforcers had four players who were injured and wouldn’t even suit up, another who had a nagging groin injury, and a sixth player who flew to California for a personal matter.

The Enforcers were so short-handed that the team’s head coach Brent Clarke would also have to play in the game. This was not as big of a deal as Nichols’ return to the ice because Clarke played in 27 games since his last full season in 2016, and had even played against Battle Creek the previous weekend, where he scored a hat trick. Plus, Clarke was a spry 33-years-old. Injured forward Ahmed Mahfouz was anointed as the acting coach.

Desperately needing one player for the game, the Enforcers looked within the franchise for a player, specifically the team’s owner. Luckily for the Enforcers, Emilira’s owner had some hockey experience, including being drafted by the Philadelphia Flyers in 1983. While Robbie Nichols never actually played a game in the NHL, he did have a 14-year career in the American Hockey League (AHL) and International Hockey League (IHL).

Nichols hadn’t played since 1998 when he played for the Flint Generals of the United Hockey League (UHL), never-the-less, his team needed him, so he brushed off the dust and returned to the ice 21 years since he last played professionally. The 55-year-old emergency player was ready and willing to help the franchise, knowing full well that his body would pay the price the next morning.

“I had to think about it a bit. I knew I’d be sore. But some Advil before the game and during the game meant I wouldn’t feel pain until after the game,” Nichols told ESPN.

Nichols had one pregame tradition from his playing days: Eat a Big Mac. Nichols was superstitious that the McDonald’s meal was his lucky rabbit’s foot because he once scored six points in a game after eating a Big Mac and fries. So he went to McDonald’s to get ready for his big Enforcers debut.

“I just wanted to help guys out. If someone got hurt, I could take a shift or two,” Nichols said. “I told [Mahfouz] that I was only there in case of emergency. He said, ‘Well, you tell me when you want to go.'”

“The first period was tough. I was terrible. I had three shifts and didn’t get much done,” said Nichols. “The second period, I started getting my legs. I ran over three guys. Had some good hits. And got a penalty.”

During the game, one of the Hat Tricks’ players skated over to Robbie and told him that his father played with Nichols “decades ago.”

The Elmira Enforcers would end up losing the game by the score of 5-4, the owner might have to think about trading himself after the loss. Nichols was feeling great on Saturday, but did feel the effects from a two-handed slash he was given by a Danbury player he checked.

“As you get older, you get slower. I couldn’t keep up with these kids. My mind can go. My legs can’t,” Nichols said of his return to hockey. “But it was exciting to be there. You get competitive again.”