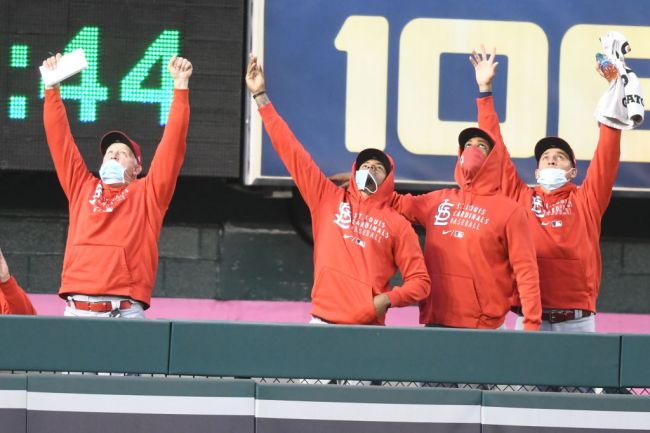 There are a few things you look forward to most when attending a baseball game: an ice cold $13 beer, a hot dog (which is not a sandwich), the crack of the bat, maybe some cracker jacks or peanuts, and the thrill of catching a foul ball or — even better — a home run. We can not confirm whether this Nationals fan was able to enjoy the finest ballpark food or sip on some overpriced suds, but we can definitively say that his evening was a rollercoaster of adventure. For both bad and for good.

The St. Louis Cardinals traveled to Washington for a two-game, midweek series against the Nats on Monday and blew the door open with a 12-5 win. Shortstop Paul DeJong opened the scoring with a dinger in the second inning and the visitors added four more before the night was over.

Utility man Tommy Edman stepped up to the dish with one out and a runner on in the top of the third inning and worked a 3-0 count. Standard protocol would see Edman take the fourth pitch in hopes of drawing a walk, but he either had the green light or saw a pitch that he couldn’t resist and swung away. The 25-year-old got all of the 3-0 offering and sent it deep to centerfield for a two-run shot. While it wasn’t a moonshot, the ball crossed the fence near a small grouping of the limited-capacity crowd and gave a fan a real shot at making the grab at the wall. He had his glove on and everything.

However, the fan couldn’t haul in the homer and it fell to the ground in front of him. You can hear how frustrated he is with himself as he smacks the railing before throwing his glove in frustration. Even the broadcasters got in on the jawing.

After a difficult year without live sports, this fan got back into the stadium and blew his opportunity for glory. Nevertheless, he stuck with his team during the beatdown and received a second chance. Any fan who stays in the stands through a trouncing like Monday is dedicated to the game and he was rewarded accordingly from the baseball gods.

Two innings later, with a 10-2 lead, Cardinals outfielder Justin Williams gave one a ride to the exact same spot as Edman. The fan, who had so disgustedly dropped the first home run ball, had it hit right to him. He stood up and made a nice outstretched catch that didn’t require too much effort. It was as if Williams hit it in his exact direction on purpose.

Remember the fan who dropped Tommy Edman's home run ball earlier tonight? There's a happy ending to this story. He gets a souvenir on Justin Williams' homer, and @DannyMacTV and Jimmy are lovin' it.

It could have been a horrible evening for the young man. The drop would have haunted him for the rest of his life. Instead, he was given the chance at redemption and didn’t let the ball drop a second time. A moment that was once too big was no longer and his smile was beaming under his mask. You love to see it.