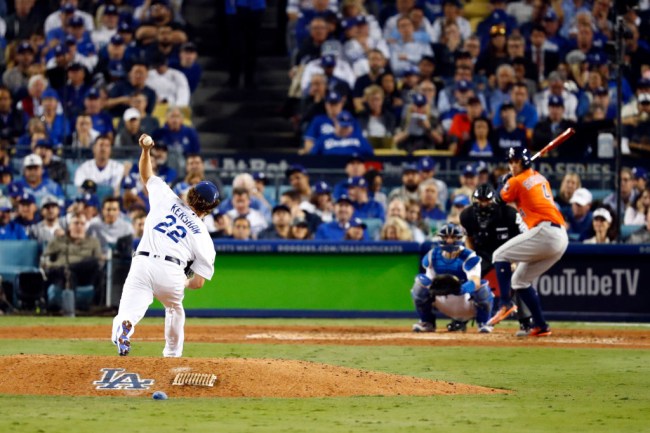 You could easily make the case that Clayton Kershaw has been the most dominant MLB starting pitcher over the past decade. Posting a record of 156-62 (.719%), a 2.13 ERA, averaging 218 strikeouts per season with only handing out 43 walks per year.

What makes Kershaw such an effective KO king is his fastball that tops out in the low 90s, an 11-to-6 knee-buckling curveball that hovers around the mid-70s, and a hard biting slider. Kershaw’s success is getting batters to chase the slider and curveball out of the strike zone, some that are in the dirt.

In Game 5 of the 2017 World Series, the Houston Astros were not offering at any of Kershaw’s breaking pitches. Literally none.

Baseball writer Tom Verducci appeared on the MLB Network this week and presented a crazy statistic from the 2017 World Series between the Houston Astros and Los Angeles Dodgers. In Game 5 of the 2017 World Series at Minute Maid Park, Kershaw threw 51 breaking pitches to Astros batters and miraculously didn’t swing at any of them.

“Kershaw threw 51 sliders and curveballs that day, and got *zero* swings and misses on them, that alone will make you start thinking that something was up,” Verducci said on the MLB Network.

“Kershaw threw 51 sliders and curveballs that day, and got *zero* swings and misses.” pic.twitter.com/wkjn3ivjA7

Of all of Kershaw’s devastating hooks that give catchers nightmares, not one Astros’ hitter took the bat off their shoulders to even attempt to hit Clayton’s pitches. The Astros couldn’t get a hit or a walk off Kershaw in the first three innings, then exploded for four runs in the fourth frame and three more in the fifth inning before he was taken out of the ballgame.

Sure Kershaw has been a different pitcher in the postseason, going 9-11 with a 4.43 ERA. But heading into the World Series, he was coming off two stellar starts in the NLCS against the Chicago Cubs.

It also doesn’t help that the Astros home-away splits from the 2017 postseason are night and day. In the Astros’ nine home games, they batted .273 with a .343 on-base percentage, a .519 slugging percentage, and scored an average of 5.7 runs per game, winning eight and losing only one game.

However, in nine road games, Houston batted .208 with a .284 on-base percentage, a .347 slugging percentage, and scored an average of three runs per game, winning three and losing six games.

Astros players batted significantly worse on the road than in the friendly confines of Minute Maid Park.

This only makes more of a case that the Houston Astros were sign-stealing cheaters in 2017.