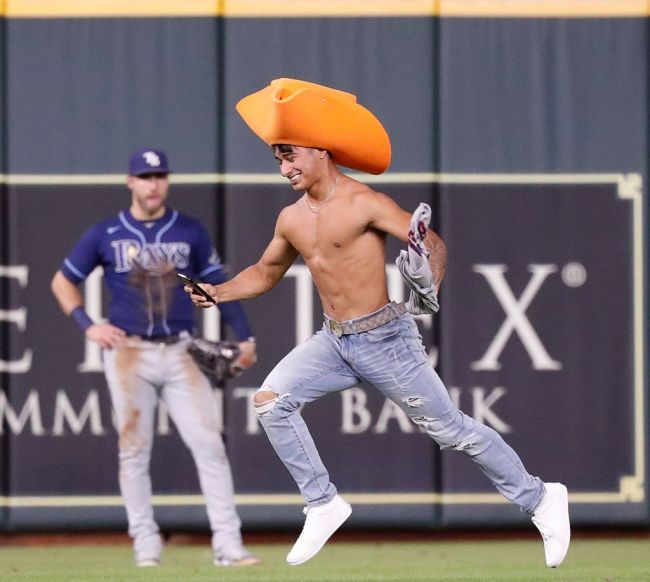 The Houston Astros didn’t put up much of a fight against the Rays on Wednesday and neither did their security team. Amidst a 7-0 loss, a pair of fans decided to make the game more interesting by running on the field at Minute Maid Park.

During the ninth inning, two fans hopped the railing and took off into the outfield.

Their escapade was exhilarating!

One shirtless man, wearing a giant orange foam cowboy hat, took the field first. And then he was followed closely by his friend wearing a foam finger.

The two ran circles around the security team for just over a minute.

At one point, the foam fingered fan threw a NASTY juke that sent his pursuer full-spread into the ground. Not long thereafter, the shirtless fan put a quick little stutter-step on a guard who thought that he stood a chance at making the capture. He did not.

Eventually, both guys seemed to run out of gas near the right-field warning track. The man in the white shirt goes down first.

At that point, in an act of solidarity, oversized cowboy hat guy laid down and gave himself up. Both fans were escorted off of the field and will surely face charges, but man oh man did they put on a show.

It took not one, not two, not three, not four, not five, not six, not seven, not eight, but nine security guards to take down the two men. Even the Rays right fielder was in (extremely minimal) pursuit of the streakers, so call it 10.

Take a look at the action:

The Astros can clinch the AL West with a win on Thursday night, but these two fans will not be in attendance.