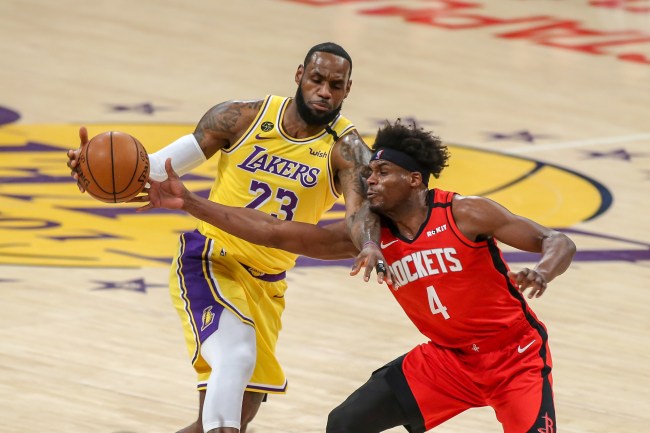 Houston Rockets forward Danuel House Jr. has found himself in trouble with the league for apparently violating bubble protocol and Rockets fans somehow think LeBron James could be involved in implicating House.

Earlier this week, after several days of being mysteriously sidelined due to “personal issues”, it was revealed that House Jr. was being investigated by the league and may not be allowed to play during the remainder of the Rockets-Lakers series after he allegedly allowed a female COVID-19 testing official into his hotel room.

Rockets fans believe LeBron and his team may be involved in leaking information on House considering LeBron’s friend CuffsTheLegend broke the news about House’s potential suspension days before the media.

On Tuesday, when it was announced that Danuel House was going to miss Game 3 because of personal reasons, “Cuff” fired off several telling tweets, including one of which where he made it known that he had the inside story on House’s absence prior to Wojnarowski and/or Charania.

With the clear connection to James and the apparent foresight into the situation involving the Houston Rockets forward, the question has to be raised regarding how “Cuff” knew about the situation before the most reliable sources in the media.

But this incident took place within the Rockets camp and the Houston Rockets’ hotel, which the Lakers aren’t sharing with them. With that being said, it’s difficult to not connect the dots between the LeBron news Cuff has leaked in the past, his lengthy relationship with James, and him providing the specific details about House’s whereabouts before even Wojnarowski discovered it.

LeBron and/or his camp would have inside information into the situation if they were responsible for passing it along at some point, and the fact that the NBA launched an investigation within 24 hours after Cuff’s tweets makes one wonder if LeBron’s camp played a part in the NBA’s investigation and/or House’s absences in Game 3 and Game 4 (at the very least).

LeBron certainly has the power to prompt a suspension and/or an investigation based on his word and stature within the league, and with his camp leaking early details of House’s situation, it’s certainly not far-fetched to think James was responsible.

Lakers fans were amused by the conspiracy theories and immediately mocked Rockets fans.

Rockets fans are really the most embarrassing fan base in sports. this is so pathetic. https://t.co/a5KQvBJVzo

This is why people hate rocket fans https://t.co/oNu5gXKgzH

You think Lebron needs to snitch on House to win this series?? Delete your entire account https://t.co/7smZ3Ylrz4