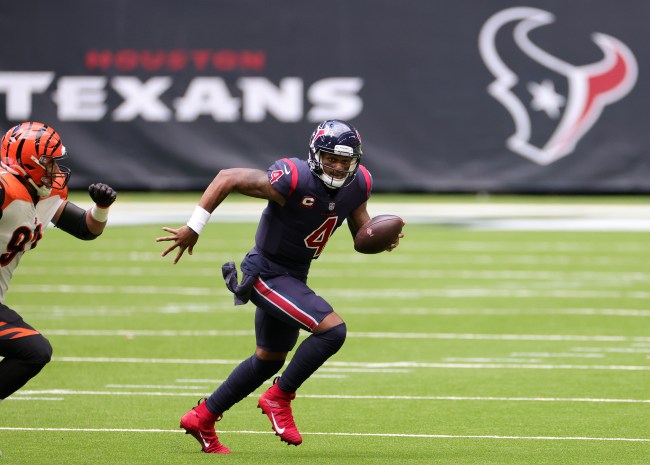 We all have that one person in our fantasy football leagues. The person who has that one player they are constantly trying to trade, but have no concept of what the player is actually worth. Maybe they’ve offered you Miles Sanders for a pair of first round picks or JaMychal Hasty for JK Dobbins a dynasty league.

The Houston Texans are that person in the NFL. They have absolutely 0 leverage right now as they try to trade Deshaun Watson. None. He has made it abundantly clear that he never wants to wear a Texans jersey again. We also don’t even know if or when he will ever wear any team’s jersey again.

That has not stopped the Texans from asking for a major haul in return for Deshaun Watson. Today, The Athletic’s Jeff Howe revealed just how out of touch the Texans are.

The Texans have wanted at least five assets, including three first-round picks, in any trade for Deshaun Watson, according to sources.

They have no plans to reduce those demands when trade discussions resume this offseason.

That is an insane asking price under their current circumstances. They are desperate to get rid of Watson and the rest of the league knows it.

It feels like something more akin to what the Lions got for Matt Stafford would make a lot more sense. Everybody knew Stafford was leaving Detroit, but they managed to get 2 1sts and a 3rd and just had to take on Jared Goff’s contract in return.

Deshaun Watson is a lot younger than Matt Stafford, but also carries a lot of question marks right now. There is every possibility that if he is able to return to the NFL, he’ll face a suspension when he does. He’ll also have been away from the game for over a year. How quickly would he be able to return to 100%?

If you trade for Deshaun Watson, you could essentially be looking at a lost first year. That means that you could be giving a couple of high value draft picks in this deal and not seeing a return on that investment until the 2023 season.

It all just seems like way too much ask in return for Deshaun Watson with no leverage and a whole lot of uncertainty.