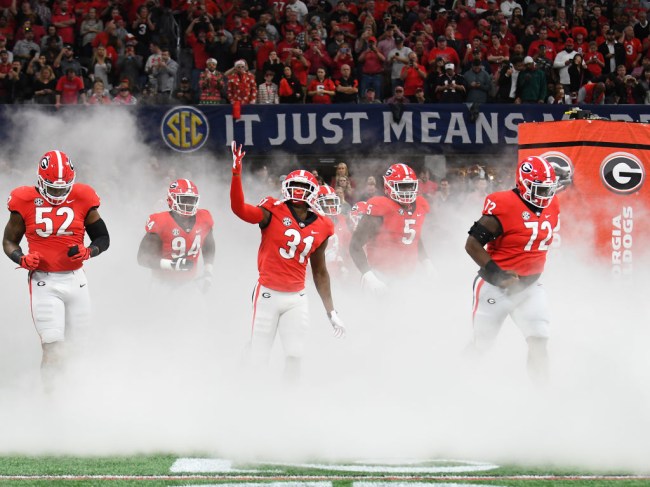 It’s not exactly a secret that you have to be an absolute freak of nature if you want to play football on a competitive level and anyone who took a communications class in college knows just how massive some players can be (I’m 6’10” and some of the dudes on campus managed to make me feel small).

This is especially true when it comes to the linemen on both sides of the ball who get down and dirty in the trenches, whether they’re tasked with going after the quarterback or protecting the guy in the pocket.

It’s sometimes hard to fathom just how big some of the Large Adult Sons on the field are when you’re watching a game on TV, and if you’ve never encountered a 300-pound-plus player made almost entirely of muscle in the wild, it’s difficult to put things in perspective.

Common knowledge would seem to dictate NFL teams boast the largest linemen in the sport but it turns out some college football teams are nothing to scoff at—especially the Georgia Bulldogs, who boast the largest offensive line in the NCAA with a whopping average weight of over 328 pounds (14 pounds more than the NFL average).

The average NFL O-Lineman weighs 314.8 lbs.@GeorgiaFootball’s entire O-Line is BIGGER than that 😳 pic.twitter.com/5INzAu5CMM

As WTF Stats notes, Georgia would actually have the heaviest average offensive line in all of football if it wasn’t for the Raiders’ Trent Brown, who skews the statistics a bit by tipping the scale at a wild 380 pounds.

Georgia would have a bigger o-line than every NFL & college team if it wasn’t for a 380-pound man named Trent Brown on the Raiders. (Complete NFL list in my story)

I wish the Murray State defensive line the best of luck when they face off against Georgia tomorrow. They’re certainly going to need it.