Here’s How ESPN, CBS, And Yahoo Fantasy Are Planning To Deal With Pitcher/Hitter Shohei Ohtani 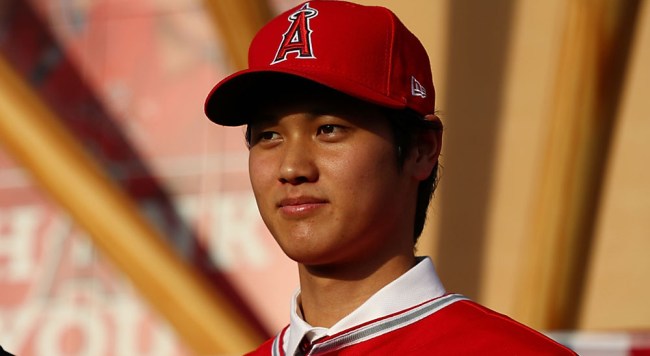 The answer to the latter issue, how the Angels will handle Ohtani, appears to have been settled (for now) rather simply.

Angels manager Mike Scioscia provided some insights into the nuts and bolts of the team’s plans for Ohtani in conjunction with the reporting date for pitchers and catchers. Scioscia confirmed that Ohtani will be part of a six-man starting rotation in Anaheim, and his exposure as a designated hitter will be based in part on the workload he’s prepared to handle. The Angels regard Ohtani as a pitcher first, and they’ll work off that assumption in assessing his offensive role.

‪Don't say we didn't get you anything for #ValentinesDay.

Now for the important stuff. How are the various fantasy baseball leagues like Yahoo!, CBS and ESPN going to deal with Shohei Ohtani, who will be both a pitcher and a hitter?

Here’s how Yahoo! says they’re going to do it, according to Baseball America…

If you’re in a Yahoo! league and you want to accrue Ohtani’s hitting and pitching stats, you’re going to have to draft him twice, once as a pitcher and then again as a hitter. There were a number of potential solutions that Yahoo! discussed but ultimately, Yahoo! content manager Guy Lake said, this decision combined the best of both worlds when it came to functionality and playability.

That… doesn’t sound like a very good solution, but obviously this is uncharted territory for fantasy sports leagues.

“That’s the best gloss I can put on it,” Lake said. “I would love it if we could say ‘No problem’ (and encompass all of Ohtani’s value into one draftable player). If it were easy, there would be one. Let’s be clear about that: It’s not easy, but we’ve come up with what we think is the best from a set of imperfect choices.”

Next up, CBS, who spoke with For The Win about their plans…

CBS Fantasy Baseball, however, found a way to make it work: When the site opens for the 2018 season later this month, Ohtani will count as one player that can be toggled between pitcher and hitter, although that means if you start him at one position, you won’t be able to accrue stats from the other roster spot (if he’s your pitcher one night, you won’t earn anything hitting-wise and vice versa). CBS’s platform also allows commissioners to go in and adjust stats after the fact, so if there’s a league that wants Ohtani to gather both hitting and pitching stats in games he does double duty, that’s possible.

[Brian Huss, a Senior Director, Product Development at CBS] reported that “it took some conversation and some convincing” with the engineers tasked with making serious changes. He also said once they got into it, they knew it wold be the right thing for users. Huss saw whiteboards in offices filled with solutions on how to adjust the code to fit in Ohtani.

Okay, so how is ESPN planning to deal with the uniqueness of Ohtani? Here’s how.

In ESPN leagues, Ohtani will serve as one player — just as he will be for his Angels — with the ability to be started as either a hitter or pitcher.

Mind that key word (“or”), as in either hitter or pitcher, but not both. Ohtani will begin the 2018 season with dual eligibility, as a designated hitter on the hitting side and starting pitcher on the pitching side, and in each individual scoring period in your league, you will need to make a decision as to on which side to use him.

This means you will have to pick your poison each day with Ohtani in leagues with daily transactions, but for weekly transaction leagues whatever position you choose to start the week is the only position that Ohtani will accrue stats for in that week.

I have to say, I think I am liking the way CBS is handling Ohtani the best. What do you think?