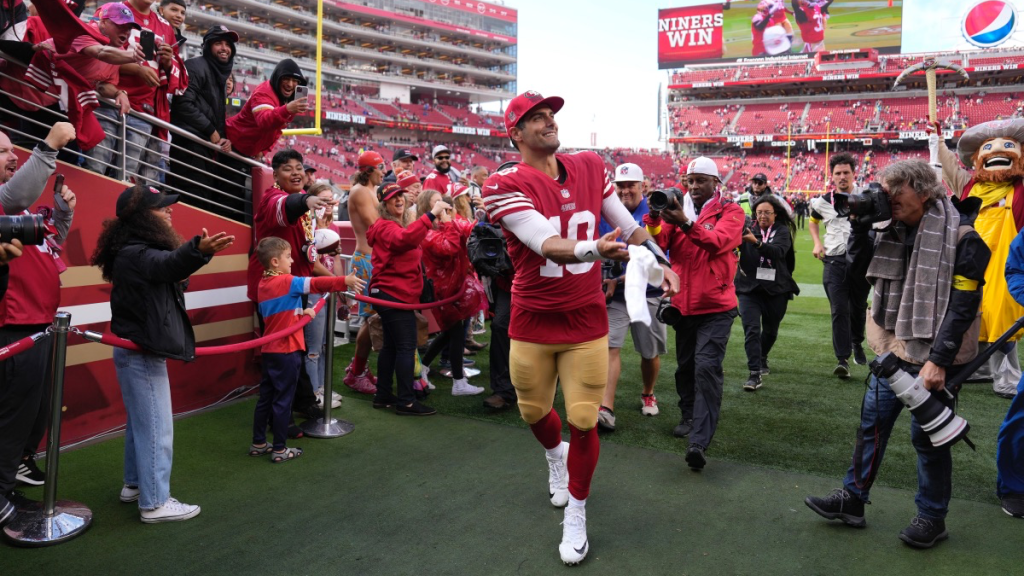 The San Francisco 49ers suffered a major setback to their 2022 season plans in Week 2 when starting quarterback Trey Lance suffered a tragic and nasty ankle injury that reportedly requires season-ending surgery. There was an immediate outpouring of love and well wishes for Trey Lance after he was carted off the field, but the game went on and backup QB Jimmy Garoppolo came into the game.

Trey Lance suffered his (likely) season-ending injury with 2:20 left in the first quarter and former starting QB Jimmy Garoppolo came into the game. This came after a LONG offseason of trade rumors swirling around Jimmy G that culminated in a restructuring of his contract.

By (1) coming into Week 2’s game to replace Trey Lance, (2) playing at least 25% of the snaps, and (3) the San Francisco 49ers winning the game, Jimmy Garoppolo earned an extra $350,000 on Sunday alone. And he now stands to earn a lot more throughout the rest of the season.

Then there’s ‘$5 million’ listed under miscellaneous which is where Jimmy stands to get PAID this season as the starting quarterback should things go well. His potential bonuses (via Sportrac) are:

Jimmy told reporters ‘it feels good’ to earn that $350K

Jimmy G isn’t too upset about his $350K bonus for playing and winning today’s game 😅 pic.twitter.com/BIvTiWTPli

On top of that, if Jimmy Garoppolo takes the San Francisco 49ers to the Playoffs (again) he will start earning even larger bonuses.

If Jimmy G earns every bonus possible (which means we win the SB) that means we just won a SB with a QB who cost us $11.1m dollars and we freed up $14m in salary cap.

It’s wild that we’ve arrived at this point after an entire off-season discussing which team Jimmy G would get traded to. It’s great to see Jimmy having another chance to show that he’s a good quarterback and deserves a starting spot in the league, it just would’ve been great to see this happen without a Trey Lance injury as the catalyst.

Kurt Warner weighs in on the 49ers' QB situation https://t.co/eEwStnP4eU