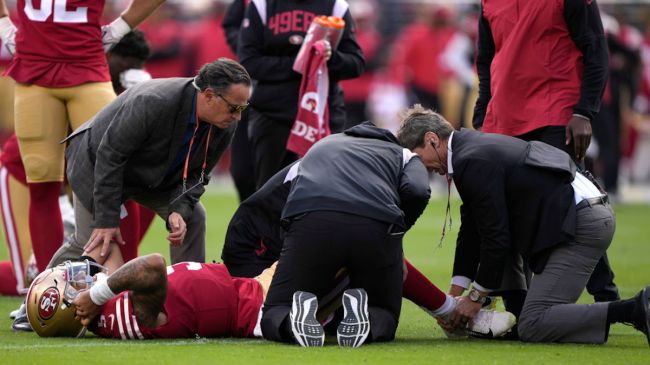 Starting in just the second game of his career, San Francisco 49ers quarterback Trey Lance has suffered an ankle injury that will require surgery and likely cost him the rest of his season, according to ESPN’s Adam Schefter. Reports indicate that Lance suffered a broken ankle.

Lance, the 22-year-old former third overall NFL draft pick, exited Sunday’s game against the Seattle Seahawks with 2:20 left in the first quarter and did not return. Backup signal caller Jimmy Garappolo, who was on the trade market for essentially the entire season, came in to see out the game against the Seahawks and will be the Niners starting QB for the rest of the year (barring injury).

Following the news of Lance’s likely season-ending injury, football fans took to Twitter to both express their shock and wish the young QB a speedy recovery.

If this isn’t fate for Jimmy G idk what is https://t.co/wTxektrPFh

Terrible. This kid never got a fair shot. Next year I hope. https://t.co/7hZwSWiB7F

Fucking awful. Heartbreaking for the kid. Tough not to point a finger at the head coach for putting the future franchise QB in jeopardy, early in the season against a terrible football team. Totally unnecessary. https://t.co/KlNhmfHLMH

Seeing how fellow quarterback Joe Burrow rebounded to take the Cincinnati Bengals to the Super Bowl after a devastating knee injury in his rookie year, Lance certainly still has his whole career ahead of him once he gets healthy. It’s a tough blow, but at 22 years old, he’s got plenty of time to bounce back. Get well soon, Trey.