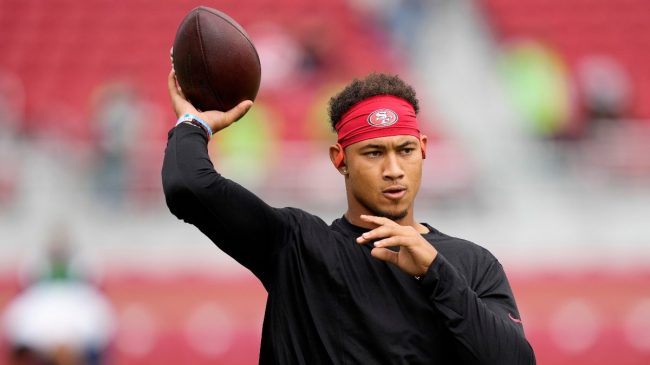 There has been a ton of hype surrounding Trey Lance once the San Francisco 49ers named him the starting quarterback. Many were hopeful he’d bounce back against the Seattle Seahawks after an abysmal performance in Week 1. However, the young quarterback sustained a scary injury early in this matchup and was carted off of the field.

According to David Lombardi, Lance suffered an ankle injury on Sunday. The 49ers wrapped his leg up in an air cast and carted him off of the field. It’s unclear exactly how serious the injury is for now, but updates are sure to pour in at the conclusion of this Week 2 matchup.

It's an ankle injury for Trey Lance

This is a brutal blow for Trey Lance. He struggled with injuries throughout his rookie campaign while serving as a backup to Jimmy Garoppolo. The 49ers have high hopes for the young quarterback, as the front office traded three first-round picks to acquire him. Many are hoping for the best, as seeing a talented athlete go down with an injury is never a great thing to see.

NFL Fans Hope Nothing But The Best For Trey Lance

The ankle injury doesn’t look good, especially considering his foot was pointing in the wrong direction. For that reason, NFL fans are hoping for some good news regarding Trey Lance and the 49ers.

@treylance09 we are all just sick to our stomachs for you! You’re in our thoughts and prayers young buck! Heal up!

Prayers up for @treylance09… looks like he’s going to be out for the year, but hopefully he’s okay

We’re hoping for a speedy recovery as well.

Only time will tell how serious the injury is, but regardless, hopefully, the 49ers quarterback recovers quickly.

Keep an eye on San Francisco for now. We’re likely to get an official injury on Trey Lance after the game against the Seahawks.